Pirelli: The Architecture of Industry The construction of the tower is a clear illustration of Pirelli’s global approach to industrial architecture. Also the construction of the very first factory, which opened in 1873 in Via Ponte Seveso in Milan, made its mark, for the journalist of L’industriale, who visited the construction site in July 1872, wrote that the building was “of uncommon size, and not devoid of the sturdy elegance of which many foreign factories are so proud”. Those foreign factories were the ones that the young engineer Giovanni Battista Pirelli had visited a couple of years earlier, in the winter of 1870, during a study trip abroad that had been made possible by the scholarship he had won at the Politecnico after his degree course. He had seen factories in France, Germany, Belgium, and Switzerland – a whole new industrial world, with buildings that would later form the skylines of future cities.

The article in L’Industriale in 1872 also informs us that the factory in Via Ponte Seveso “will augment the agreeable aspect of the district, which has been chosen for some years now as home to much of the city’s industry, and appears to be destined for a magnificent future.” While this may have been true for the area then known as “Dei Corpi Santi” in Milan, it became even truer of the suburb around what is now Piazza Duca d’Aosta, with the construction of the Bicocca factory in 1908. This industrial district was destined to expand to a million square metres by the mid-twentieth century and to have an entire district of Milan built around it. At the centre of this “rubber city” stood a cooling tower – on which construction started in 1950 – which was used to recover the steam produced by the manufacture of tyres. A gigantic forty-metre high chimney that formed a concrete hyperboloid towering over the Milan skyline.
That cooling tower is now embedded and protected within a reinforced concrete cube with a glazed facade for looking out and looking in. This is how the Pirelli Headquarters was envisioned by Vittorio Gregotti, when he designed the new urban layout of Bicocca in 1985. The Tower was opened in Milan in 1960, but it was soon accompanied by other symbolic Pirelli buildings: in 1961 Pirelli’s Brazilian branch opened its new headquarters in the Campos Eliseos tower in São Paulo, and in the late 1960s the Group’s Argentinian subsidiary had the Italian architect Mario Bigongiari design its own Pirelli Tower in Buenos Aires. But there were other industrial buildings, and other distinguished architects: in 1958 Roberto Menghi designed the Istituto Piero Pirelli in Viale Fulvio Testi, Milan, while Giuseppe Valtolina had already put his name to the industrial plant in Settimo Torinese in the early 1950s. 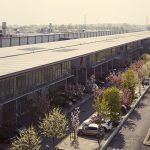 It was here that in 2011 the “factory in the cherry orchard” – the new Pirelli Industrial Centre – was built, with the “Spina”, the central services building with offices and laboratories, designed by the architect Renzo Piano. In the words of Vice-President Marco Tronchetti Provera, “the factory is a complex place of activities, relationships, and also of contrasts, but above all of original interaction and synergy. Elements that need visibility, so they can be understood, making it possible to overcome old stereotypes and relationships that have been overtaken by the course of events”. The "Spina" of Pirelli Industrial Centre in Settimo Torinese designed by the architect Renzo Piano, 2016, photo by Carlo Furgeri Gilbert