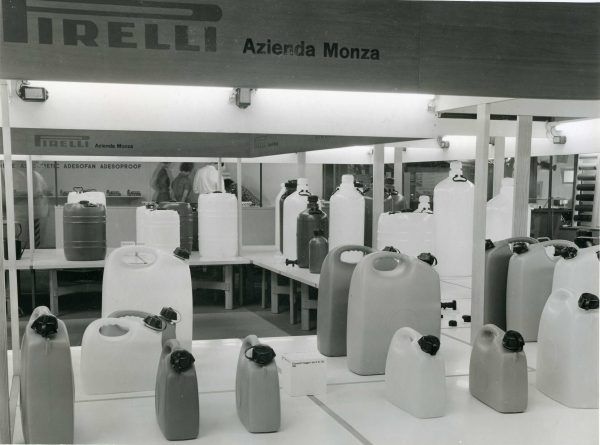 “The shape of a mass-produced object has precise origins, responding to specific needs, and it has a particular purpose, so it can have adequate aesthetic qualities.” These are the words of the designer and architect Marcello Nizzoli in an article entitled “The factory and the artist”, published in Pirelli magazine in 1954. The article examined a subject that, in the second half of the twentieth century, became of prime importance in the cultural debate concerning the role of the artist in the design of objects produced by industry. Could an everyday object somehow become a work of contemporary art? This was when what we now refer to as “industrial design” was beginning to take shape.

That same year, Bruno Munari’s advertising poster for Pirelli Coria soles became part of the permanent collection of MoMA, the Museum of Modern Art in New York. Catalogued as object no. 527.1954 in the Architecture and Design department of MoMA, the poster had been designed by Munari for display at the Milan Trade Fair of this line of soles, which were “neither rubber nor leather, but rather a mixture of the two: light, flexible, adherent, waterproof. And, especially, extremely long-lasting”. The “labyrinth” invented by the designer – a graphic itinerary full of obstacles easily overcome by footprints naturally protected by a Coria sole, was an invitation to “walk with progress”. MoMA took note.

A few years later, in 1959, it was Roberto Menghi’s turn: the Milanese designer, who had created a line of plastic containers produced by Pirelli’s Azienda Monza, took his polyethylene jerrycan to the packaging fair organised by the American museum.  Olive green, extremely practical, and easy to handle, as well as safe, “Menghi’s jerrycan” was certified by the experts at MoMA as an icon of Italian 1950s industrial design.

The history of the New York museum is also linked to another great Italian designer, Massimo Vignelli. Born in Milan in 1931, Vignelli moved to New York with his wife and assistant Lella Valle in 1964. That year also saw the famous advertisement for Pirelli bicycle tyres that Vignelli created with the photographer Aldo Ballo and that, in the version with a pink background, is now part of MoMA’s permanent collection.

But the concept of design is broad and cuts across boundaries, beyond just objects and printed advertisements. This is why the archives at MoMA also contain Pirelli’s film commercial The Tortoise and the Hare. Directed by Hugh Hudson in 1966 with the Cammell Hudson and Brownjohn Associates production company for the British Pirelli Ltd, the medium-length film was awarded at the time for the lyricism of its advertising message. But one brilliant detail, created by the acknowledged talent of Robert Brownjohn in composing the front credits of films, did not escape MoMA. This was the use of moving vehicles, the sides of concrete mixers, trailers of heavy goods vehicles, bulldozer buckets, and the bodies of vans to form a sort of jig-saw puzzle of moving blackboards on which to write the names of the actors and personalities of the film. Here was the journey and the promise of mobility offered by the Pirelli Cinturato. In front of a road map of Italy, also a lithograph of the preparatory study for this minor masterpiece is also catalogued as no. 1100.2011, in the Architecture and Design section of the Museum of Modern Art in New York.

However, the works of Munari, Menghi, Vignelli and Brownjohn were not the only Pirelli creations to cross the hallowed threshold of the Museum of Modern Art. When the electric Cifra 3 clock made by Solari di Udine, a subsidiary of the Pirelli Group, entered the museum’s permanent collection in 1968, the company house organ Fatti e Notizie commented that the decision rewarded “all that is most significant in the industrial and artistic development of modern civilisation. Being included in the collection is the greatest honour that an object can receive for its design”. The Cifra 3, a direct-reading clock with a system of revolving flaps, had been designed in 1966 by the architect Gino Valle. Solari Cifra clocks, in a range of colours, had become instantly recognisable, partly due to the success of the direct-reading system used on notice boards in stations and airports in every corner of the globe. And MoMA, once again, took note.