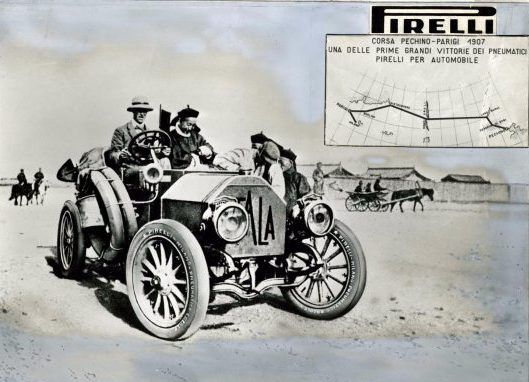 It all began on January 31, 1907 with an announcement in the French newspaper “Le Matin”:

«What we have to demonstrate today is that now that man has a car, he can do anything and go anywhere. Does anybody accept the challenge of going from Peking to Paris by car next summer?». Someone evidently accepted the challenge, because the most prestigious race of the era started off at 8 am on 10 June 1907; the Peking-Paris motor race covering seventeen thousand kilometres on tough, rough and often uneven roads. The Italian team was headed up by Prince Scipione Borghese, who immediately requested Pirelli tyres for his powerful Itala. He got what he wanted. Alongside him were the Corriere della Sera journalist Luigi Barzini and the mechanic Ettore Guizzardi. Their victory two months later with their arrival in Paris has become legend. And so have Pirelli tyres, which contributed to the success of the undertaking and immediately became world famous.

In his travel log “Half the world seen from a car from Peking to Paris in 60 days”, Luigi Barzini recalls that first thrilling day of the race as follows:

«…The time has come. The drivers and mechanics reach their vehicles. The engines roar, and thick clouds of smoke are released from the exhaust pipes. The crowd’s voice rises. Many officials who came on horseback climb on. One hundred cameras waver above our heads in search of their target. We Italians rush to climb back into the Itala that awaits, quivering and trembling as though impatient to set off […]. The cars are stationary, awaiting the signal […] An elegant lady, Mme Boissonnas, the wife of the first secretary of the French Legation, gracefully takes on the task of starter.

She raises the flag. A moment of silence falls upon the crowd, during which only the rumbling engines can be heard. The smoke surrounds us and isolates us in part. The flag is lowered.

Fireworks and firecrackers burst all around. We move through this clamour of battle. Off we go. We’re on our way. […] And on the road, kept clear by Chinese soldiers, between two wings of silent people, the only things left are five cars, chasing each other through the Capital of the Celestial Empire at unprecedented speed, and one that will probably never be witnessed again either.»