Photographing Speed: Shots on the Track 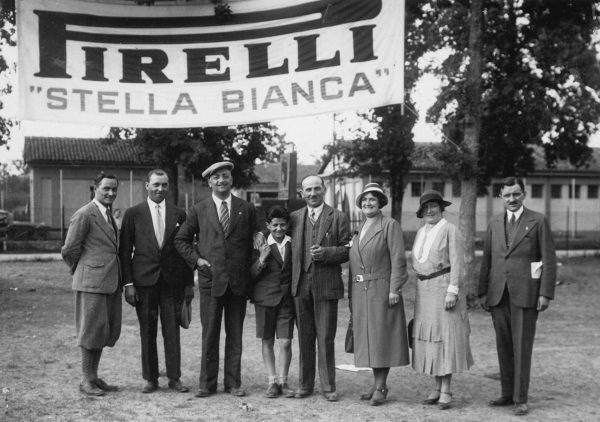 The “Stories from the World of Pirelli” section has already taken a look at press photographers covering cycling races – the art of capturing fatigue. Today we look at photo journalists and motorcar racing – the art of capturing speed. One of the first photo reportages of a motoring competition was of the 1907 Peking-Paris race: a photo shoot involving a number of people, for local photographers, or members of the Italian team on board the Itala, would be asked to take photos in the towns they went through. The iconic photo of the victorious arrival at the Porte de Joinville was by the Parisian agency Branger and it became a souvenir-postcard for sale to racing fans. Whenever there was a race in the Roaring Twenties, a man from the Strazza Photo Reportage agency would be on the spot with his camera: in our stories, we have already seen him in action at cycling races and, of course, we also find him at the most famous motorcar-racing circuits. Like at the Monza race track, which had just been opened for the 1923 Italian Grand Prix, where Strazza’s lens picked out the American driver Jimmy Murphy at the wheel of his Miller, on which the number “5” has just been painted. But the Strazza photo to be remembered in motorcar racing is surely the famous shot of 1925 when, again at Monza, the driver Gastone Brilli-Peri is immortalised as he hurtles towards victory in the Italian Grand Prix to become the World Champion, with a row of “Gomme Pirelli” advertising posters in the background.

Another photographer we mentioned when talking about cycling races was the former cyclist Lauro Bordin. Also Bordin took his camera and made a number of photo shoots on motor-racing circuits: at the start of the Circuito di Milano in 1936, for example. The driver we see is Omobono Tenni, a motorcyclist “borrowed” by motorcar racing, as was often the case back then, as the illustrious career of Tazio Nuvolari on two and on four wheels clearly shows. But Tenni, who was unbeatable on a motorbike, crashed out with his Maserati on the seventh lap.

Ferruccio Testi was an amateur photographer from Modena and, by no coincidence, the star of many of his shots was the most famous Modenese of all: Enzo Ferrari. In 1931 Testi immortalised him with the cyclist Costante Girardengo, this time in a car, and we see the boss of the Squadra Corse Alfa Romeo in 1932, looking visibly satisfied under a “Pirelli Stella Bianca” banner, together with Vittorio Jano, an Alfa designer. In 1933 we see Ferrari smiling at Testi’s camera during the “oath of eternal fidelity” with the drivers Nuvolari and Mario Umberto Baconin Borzacchini in the woods in San Damaso.

The immediate post-war period, with its irresistible return to motor racing, was often captured by the photographer Corrado Millanta. From Pontremoli in Tuscany, at a very young age Millanta moved to Milan, where he put his stamp on scores of photographs that are now in our Historical Archive. In 1948 a renewed craving for speed was clear to see behind Bruno Sterzi’s spectacles at the Circuito di Vercelli, and in Felice Bonetto’s counter-steering in his Cisitalia in Mantua, as well as in the streamlined silhouette of Besana’s Ferrari at the Circuito delle Cascine. Another magnificent shot by Millanta shows the driver of Osca no. 52 from above at the Circuito del Tigullio. It was 1949, and the following year would see the birth of Formula One. But that’s another story.