Aboard the Itala: The Pirelli Hot Lap a Century Ago 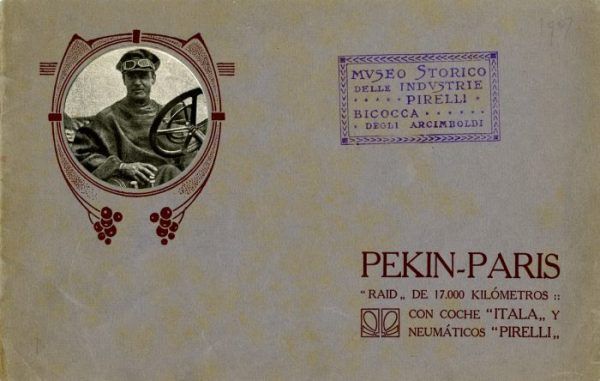 On 21 and 22 June 2018 a new session of Formula One Pirelli Hot laps was held on the circuit at Le Castellet during the tests for the F1 French Grand Prix. This Pirelli-F1 Experiences event offered a small, highly select number of guests the chance to go onto the circuit with professional drivers at the helm of supercars such as the Mercedes AMG, the Aston Martin Vanquish, and the McLaren 720S. All fitted with Pirelli P Zero tyres, of course, which is to say the highest point where track meets road. For those whose everyday lives could hardly be further away from F1, it was a unique opportunity to enter the adrenaline-fuelled world of a professional driver getting to grips with this type of mechanical beast: watching the world fly by at over 300 km/h, thrust by over 700 horsepower, is truly a once-in-a-lifetime experience. We do not know exactly what went through the mind of the first, or at least soon to be the most famous, of these peaceable guests when he was suddenly flung into the world of speed. It was over a hundred years ago, his name was Luigi Barzini, and his normal life had nothing to do with cars. He was a journalist at the Corriere della Sera and he was writing about trains (yes, trains!) when the editor-in-chief Luigi Albertini called him into the office and proposed a decidedly long “hot lap”: 17,000 km sitting next to the driver-prince Scipione Borghese, aboard a powerful 45 hp car that could move its two-tonne weight at speeds of up to 70 km/h. The car was the Itala, and it was about to enter and win the Peking-Paris motor race in 1907. In his book Peking to Paris: A Journey Across Two Continents, a logbook written after the race, Barzini tells us that, when his boss asked him “would you consent to take part?”, he replied quite simply, “with great pleasure”. So the journalist-navigator embarked for Peking and found true glory.

Like today’s hot lappers at Le Castellet, Barzini’s Itala was certainly viewed as a supercar back then. Made by Matteo Ceirano’s Itala Fabbrica Automobili in Turin from 1904, the super-sporty Itala had already won the Targa Florio in 1906, establishing itself as a dream machine, and it was adored as much by drivers as by the great personalities of politics and finance. The one prepared for Scipione Borghese was made even tougher and more competitive, and its 935 x 135 mm Pirelli Ercole tyres were the largest that could be made at the time. After its triumph in Paris, the Itala went on to reap further victories against cars of the calibre of the Scat, the Isotta Fraschini, and the Nazzaro. Then came the First World War and the Itala Fabbrica Automobili switched production to aeroplane engines under licence from Hispano-Suiza. This was the beginning of a slow but inexorable decline, and the company emerged from the war in serious financial crisis, while its supremacy came under harsh attack from Bugatti. The Pirelli Historical Archive has preserved a photograph with a caption that reads: “Targa Florio. An Itala racing car with Pirelli tyres”. The car bears the number 31 on its bonnet and the photo – by the French photo reporting agency Meurisse – dates from 1922. It shows the driver Wild aboard an Itala 51 Sport 2.8 and it was to be one of the last appearances in a race by the supercar from Turin. A new star was now shining in the world of motorcar racing: Alfa Romeo.