Pirelli: All You Need for Skiing 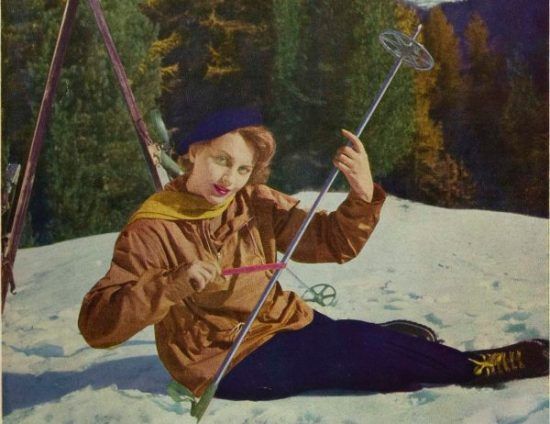 January is the time for skis and skiers. An article entitled “Accessories to Happiness” in the January 1949 issue of Pirelli magazine gave a truly imaginative definition of the skier: “a main course and side dish: meat with a certain amount of vegetables […] that look nice and tasty – a skier’s accessories need a number of qualities: they have to be practical, long-lasting, and compact, making them ideal not for the palate but for use.” There are lots of accessories that can improve a skier’s life – and they are all made of Pirelli rubber. The straps used to tie the skis, or to fasten the boots to the attachments, for example: “which mustn’t be a source of curses – which is what ice-hardened leather straps can so often be”. If you don’t want a stream of obscenities from the skier, just make them out of rubber.

An article by Nino Nutrizio, “Cable Cars Have Opened the Doors of the Mountains”, also published in Pirelli magazine, in the December 1949 issue, had the same message: “Only those who have experienced the effort it takes when wearing gloves can appreciate these little things, which are so easy to use. It just takes a light pressure for the beauty of the snows to undo the rubber strap that ties skis and sticks together.” The “beauty of the snows” that Nutrizio refers to is a lovely blonde who appears in photos on the same page to promote another accessory that no modern skier can be without: ultra-light skiing sticks with grips and rings in indestructible Pirelli rubber. And it was the same classy blonde skier who brought 1949 to an end, interpreting the entire Pirelli line for skiers on the back cover of the last issue of that year. Together with her elastic straps and ski sticks, she also shows off a very practical Pirelli windcheater, as well, of course, as the Alpina rubber soles on her boots.

In 1951, the skier changed and the “beauty of the snows” made way for the “ski girl from Madesimo”, but “the allure of little comforts” stayed the same, as we read in the article by Vittorio Bonicelli for the December issue of Pirelli magazine. This tells of the countless opportunities that rubber offers the modern skier: “My gratitude also goes to the simple, modern devices that make it easy to carry skis and baggage on the roof of a car, without the excruciating struggle there used to be with a whole tangle of wet ropes that always came loose.” Among others, no less a genius than Ingegner Carlo Barassi had worked in the development of the ski rack. His real day job was to design Pirelli tyres, but he just couldn’t resist the joys of being an inventor. And so, between a Cinturato and a BS3, Barassi also designed a futuristic ski rack in elastic fabric and foam rubber. With a Pirelli-Kartell patent, they were made for the Topolino cars of the time.

This brings us to what was possibly the most important “accessory” for any skier: the car, which had to take them in absolute safety and as quickly as possible to the foot of the snow-covered slopes. It would be quite reasonable to think of the Inverno winter tyre as a Pirelli product for skiers. In 1958 it replaced the old pre-war Artiglio, launching a line of special tyres for snow and ice. The advertising image for the Pirelli Inverno was created by the very young, but already well-established Dutch designer, Bob Noorda. And lastly, should the motorist-skier imprudently be without the right tyres, no problem: here we have non-skid Pirelli chains with rubber tensioners. When used on a normal Stella Bianca, you can drive off even on snow and ice, without any unpleasant surprises. Filled with enthusiasm, skiers in the early 1950s rushed off to the snowy slopes to forget the previous years, with a “main course and side dish” of Pirelli accessories.