The BS3: Born in the Snow 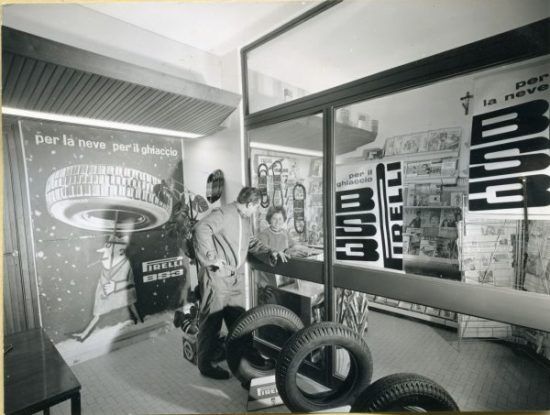 It snowed long and hard in the winter of 1955-6. Carlo Barassi was head of the Technology Office of the Pirelli Tyres Technical Department at Milano Bicocca at the time. Already with almost twenty years’ experience as an engineer in the company, he was known as a highly imaginative, extroverted inventor. He was an “ingenious dreamer”, just as Luigi Emanueli had been before him, and Emanuele Jona before that. The tradition of inventiveness goes back a long way in Pirelli. Acting on a hunch, he went back to engineer Lugli’s invention of some years previously, which had never found practical application. Giuseppe Lugli, who for years headed the Physics Laboratory of the Pirelli Rubber Sector, had gone so far as to imagine a tyre in which the casing and the tread were independent and interchangeable. The idea was to vulcanise the casing and tread rubber separately and keep them together simply by the pressure of inflation. Barassi came down – like an avalanche, one might say – on his colleague’s invention: what if the tread ring were itself divided into three bands? And if each band could act differently – and optimally – from the other two? A detachable tread, or “Battistrada Separato”, with 3 interchangeable rings for a winter design that would fear neither snow nor ice… At the end of the winter, one could just replace the three winter rings with Cinturato 367 rings and the same tyre would be perfect for the summer. Pure genius.

In the autumn of 1959, the launch of the Pirelli BS3 was a truly international event: the tyre with three different tread rings on a separate casing was seen as absolutely revolutionary. The press conference was held at the shrine of motoring: the Turin Car Show. With a visit by the president of the Italian Republic, Giovanni Gronchi. And a presentation film shot at the Cortina Ice Rink. Directed by Ermanno Scopinich, it showed female skaters chasing an Alfa Romeo Giulietta, which was safe on the ice thanks to the magic design of the BS3 tread.
That winter of 1959 was just the beginning of the career, which was to be both complex and interesting, of Pirelli’s detachable-tread tyres. They presided, for example, over the launch of tyre dealers at the Autogrill rest stops on the Autostrada del Sole in 1961: while you sit and enjoy your cappuccino and croissant, on go your four BS3 tyres so you can ride out the winter snow in safety. And then a sudden, victorious appearance in rallies, a discipline that was still in its infancy: the idea of changing the tread for each special test was simply brilliant. Just ask the gentlemen-drivers at the 1961 Monte Carlo Rally. Then came the advertisements designed by Riccardo Manzi, with a pensive little man under the snow, but sheltered by his umbrella-like BS3.

The BS3 was an invention. And, as such, it had its day. A few years later – in 1964 – it was simplified: no longer three rings but just one, still with the option of summer or winter. Its name shortened to just “BS”. It began to be considered for trucks, as the perfect answer to retreads. But it was rallying – which had been the testing ground for the Battistrada Separato – that led to the idea of a tyre that could combine both winter and summer performance. And that was how the Pirelli Winter was born – and a new Winter’s tale was written.