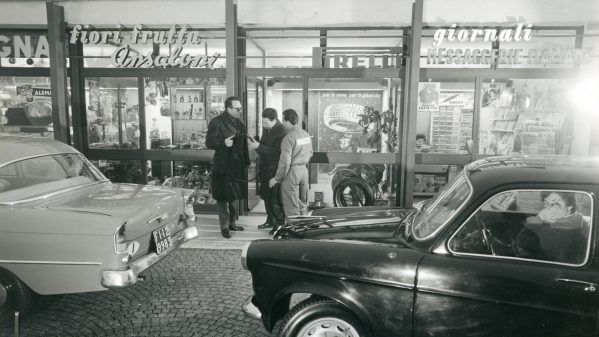 Pirelli has recently opened the first centre of its Driver dealer network in Noranco, in the district of Lugano in Canton Ticino, Switzerland. The design adopts the visual brand identity of the network, with an innovative architectural concept that takes into account both practical aspects and aesthetic beauty. The Driver outlet in Noranco consists of spaces that combine the showroom with a technology gallery, a lounge area, and sales and assistance areas, as well as reception and entertainment services for customers, offering them a truly exclusive experience at the tyre dealer. The Driver operation in Switzerland is but the latest chapter in what has become a historical bond between Pirelli and its network of dealers. The “Long P” has always been an innovative and pioneering industrial company and the bond always needs to be reinforced by consolidating its relationship of trust and loyalty towards its sales network.

It was to achieve this that, already in the 1950s, it created advertising campaigns, signed by the most important artists of the time, that gave retailers innovative solutions to help them promote the company’s top products, such as the Cinturato and the N+R tyre with its casing in Nylon and Rayon. These campaigns continued in the 1970s with commercials on the Carosello television programme, in which a tyre dealer played the lead role: “La parola al gommista” and “Ti cerco, ti filmo, ti premio” were the best-known television series between 1972 and 1974.
On the publishing front, the first issue of Pi vendere, a magazine produced by Pirelli to assist Italian tyre dealers, came out in September 1958. As well as illustrating the latest products and providing useful sales tips, the magazine also suggested promotional opportunities, such as the Pirelli stand at trade shows and suggestions for technical assistance work. One operation that was emblematic of this came in 1959, when Pirelli opened a series of sales outlets in the Autogrill service areas along the new Autostrada del Sole.

The production of various freebies and promotional items, as a more immediate way of creating a direct contact between seller and buyer, is also worthy of mention. It was suggested to tyre dealers that they should “Make sure they remember your name” with puppet-gifts for their customers in the form of Babbut Mammut e Figliut, and with Cinturato-shaped key rings, personalised playing cards, and useful gadgets for the car: “Our advertisement is your advertisement because it has been made for you, bearing your needs in mind. It is a service that is here to help you sell”. Some things never change.