Pirelli Visual Communication between the Wars:
The Age of Advertising Posters 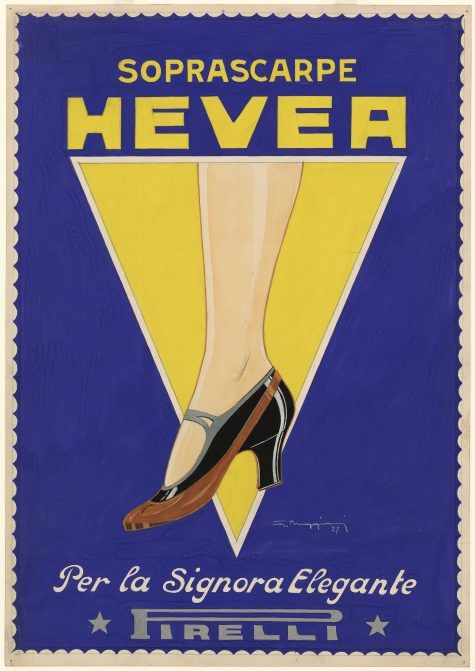 Advertising poster designers brought colour to the world in the 1920s and 1930s. This was one of the most vibrant periods in the history of advertising and it laid the foundations for what was to become modern visual product communication. Our Historical Archive preserves the original advertising sketches for Pirelli products created by the greatest pre-war illustrators, each with their own individual style but all with unprecedented creative impact. Their creativity was also inspired by the many innovative products that the rubber industry was bringing to market in those years: consumer items that had been unknown in the nineteenth century but that were becoming increasingly popular in the New World.

Giuseppe Cappadonia – who was born in Messina but moved to Milan at a very young age to attend the Accademia di Brera – could thus let his imagination run wild in Pirelli advertisements for heels and rubber sponges. He put his name to the sketch with a pixie for Marca Stella heels, which could be adjusted to the shoe depending on the degree of wear. Giorgio Muggiani, who was born into a family of merchants in Milan in 1887, was inspired by the brilliant invention of overshoes, which would keep the rain off the precious pumps worn by elegant ladies.

Pirelli named them “Hevea”, a tribute to the waterproofing properties of latex produced by the rubber tree, or Hevea brasiliensis. Raincoats were inspiration for Giorgio Tabet, a Genoese artist who was born in 1904 and graduated from the Accademia di Brera, in a drawing made in 1929 for a range of women’s trench coats, with a display of simplicity, elegance, and a skilful use of colours. And then there are tyres, which in those futuristic years evoked roaring engines, speed, and action. It was this synthesis of modernity that in 1925 prompted the Emilia-born Nino Nanni to create his memorable sketch for the Pirelli Superflex Cord: the amazing tyre that, on the road, could outstrip planes in the sky and speedboats at sea. Renzo Bassi, a Genoese emigrant in Milan, expressed the artistic mood of those years when he created the advertising campaigns for “Stella Bianca” tyres, as Pirelli Cords became known in 1927. The ground-breaking poster designers who brought to bear all their ingenuity for Pirelli products continued to make their mark in the 1930s with new stylistic forms and new graphic ideas. The work made in 1933 by Antonio Salemme, also for the Pirelli Stella Bianca tyre, is emblematic, for here the artist uses a style of lettering that is absolutely innovative in terms of its solid-to-void ratio. We know little about the life of the Genoese Mario Bertoglio, but it is certain that his interpretations of the Stella Bianca tyre, mounted on powerful, elegant cars tackling mountain roads, are some of the clearest images in product communication of that time.
An annotated analysis of the entire artistic heritage of advertising sketches now in our Historical Archive appears in a book called A Muse in the Wheels, published in 2015 by the Pirelli Foundation. It is a tribute to the masters of artistic visual communication, and to their interpretation of the Pirelli style and its products.