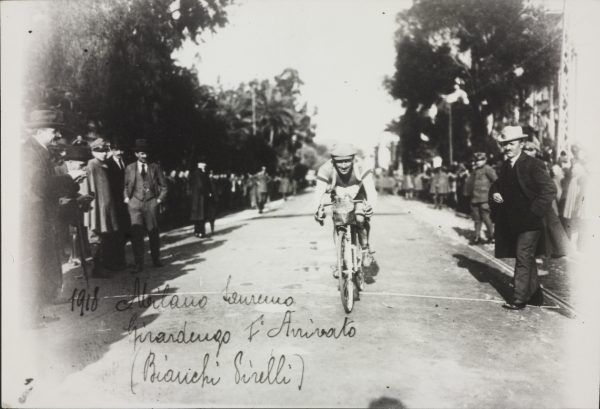 The destinies of Girardengo and Pirelli just kept on coming together, under so many different jerseys. He was from Novi Ligure and, from when he was just a little boy, he would see the Milano-Sanremo and the Giro d’Italia passing by. When Giovanni Cervi beat him in the sprint through the Ravenna pinewoods, he was already a twenty-year-old professional, Italian Champion, winner of two stages of the Giro, and winner of the Rome-Naples-Rome Gran Fondo race the previous year. True, he had not yet become the “Campionissimo” but being “Il Gira” was enough for him to enter the sights of the great teams. Certainly those of Bianchi. And then those of Stucchi, which in 1921 was the “Stucchi-Pirelli”. Wearing the jersey of the Milanese workshop – sewing machines, bicycles, motor tricycles – set up by Giulio Prinetti and Augusto Stucchi, “Il Gira” won the Milano-Sanremo in April 1921, and immediately went on to win the first four stages of the Giro d’Italia. On the fifth, in Abruzzo, he had a catastrophic collision with other cyclists. Legend has it that, with his eyes on Castel di Sangro, he traced out a cross on the dusty road, bellowing out that “Girardengo stops here!”. In the end, the race was won by his arch rival Giovanni Brunero of Legnano.

After Bianchi and Stucchi, he again crossed paths with Pirelli. It was now in 1925-6 and he was wearing the jersey of Wolsit, the Italian licensee of the English Wolseley. Aged thirty-two, Girardengo felt more the Campionissimo than ever. He snapped up two more Milano-Sanremos, once again ahead of Brunero in ’25, beating Nello Chiaccheri of Legnano the following year. He also secured another Italian Championship in ’25, bringing his total to nine. Then, of course, there was the Giro d’Italia, but this is where the first creaks began. In the Giro that started on 16 May 1925, his six stage victories were not enough for him to keep the pink jersey all the way to the end: a young fellow from Cittiglio, in the province of Varese, had popped up. A young fellow who had returned to Italy from Nice, where he had worked as a stuccoist, to race with Legnano – and who won the Giro ahead of the Campionissimo. A young fellow by the name of Alfredo Binda, whose bond with Pirelli would turn out to be even longer than Girardengo’s. The creaks became cracks in the 1926 Giro, with just two stages won and withdrawal half-way through. Ahead of him was not Binda but, worse still, his all-time enemy Brunero, backed up by the young fellow from Cittiglio for a Legnano duo on the last stretch.

There is a photo in the Pirelli Historical Archive, among countless others, taken by Ferruccio Testi in October 1931 in which we see Girardengo. It’s in Modena. The now former Campionissimo is in his Fiat 509 with Alessandria registration plates. Standing nearby is Enzo Ferrari. Behind him, frowning as always, is Tazio Nuvolari, and next to him Eugenio Siena, the Alfa Romeo test driver who is carefully studying matters. We like to think that he, the Campionissimo of cycling, has come to pay tribute to the Campionissimi of the accelerator – hardly of the brake – of the new-born Scuderia Ferrari.

This is what our Historical Archive has to say about Costante Girardengo, the Pirelli cyclist. The story of his alleged friendship with the bandit Sante Pollastri, his fellow townsman and great fan, is left to the music of Francesco De Gregori.