Coppi and Bartali: Of Men and Demigods 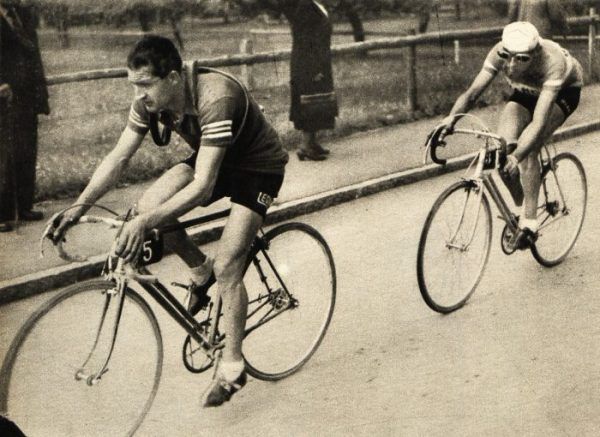 As though it were the simplest question in the world: “So do you know Bartali? Do you know Coppi?” These are the opening words of “How I Know Gino and Fausto”, an article written by Orio Vergani for Pirelli magazine no. 4 of 1950, though he does say it is “a question that might sound silly to most people”. Because who wouldn’t know Fausto Coppi and Gino Bartali, at the height of that golden year of 1950? But then again, it is likely that not even those on first name terms with them, who followed them patiently hour after hour on the races, truly knew these cycling aces. Theirs was a silent profession and the reporter might get twenty words per race – if that – and just a couple of glances.

But Vergani was not one to give in: there must be a way to portray Gino and Fausto, the two athletes who at that moment were unquestionably the greatest stars of Italian cycling. And the great journalist of the Corriere della Sera would certainly manage to do so in some unconventional way, just as he had managed a few months earlier to immortalise Tazio Nuvolari, a legend of speed then in his twilight years. After all, a really in-depth, almost scientific examination of the two champions had already been written by Giuseppe Ambrosini in the same magazine, in issue no. 3 of 1949. In the article, Bartali and Coppi had been x-rayed down to the bone, and their psychology examined in the minutest detail.

Then there was the great Nino Nutrizio, who had been following their athletic feats for years, writing up meticulous diaries and going to spy on them, as it were, even when they were resting. So Vergani just had to come up with something original to paint a new picture of the two champions. When he wrote about them that summer, in 1950, he had known Bartali for at least fifteen years. He was “the human locomotive” but without the ability to pounce. His talent emerged in long, gruelling rides, “as powerful as a November downpour and as black as a summer storm”. A talent that had Bartali say, when he was way behind his opponent Louison Bobet on the Tour de France in 1948, “the Tour ends in Paris”. And indeed it was the Italian who won the race, making history with his perseverance in the face of impossible odds. Fausto Coppi, on the other hand, was “the man who bears the weight and responsibility of being the most phenomenal athlete I’ve ever seen since Binda”, wrote the great veteran of sports interviews, Orio Vergani. Coppi was a phenomenon and he knew it, but he would have preferred not to be. Melancholy, uncertainty, and the burden of responsibility were the features of his life. In Vergani’s account, Bartali is as easy and open as a man can be, while Coppi is as enigmatic as Superman. Vergani compares one to Ulysses – the irascible patient born of mortals – and the other to Achilles, the offspring of the gods wishing to divest himself of his divine gifts. Yes, everyone, absolutely everyone knew “Gino and Fausto” in that summer of 1950. But possibly no one as well as Orio Vergani.