The Gran Premio Pirelli: A Showcase for Young Cyclists 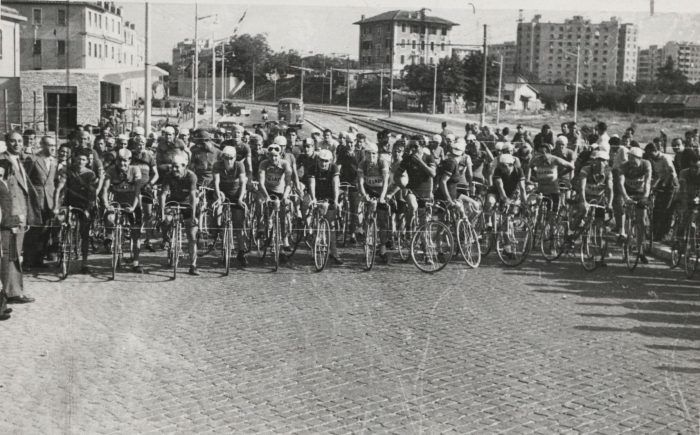 The 2018 Giro d’Italia Under 23 officially started on 7 June, with the prologue in Forlì: this is the most important multiple-stage race in road cycling for amateurs. The white jersey of the leader was sponsored by Pirelli, and it could hardly be otherwise. Because the bond between Pirelli and cycling for the young dates back a very long way. It was in March 1949 when, in an article by Nino Nutrizio entitled “Amateurs on high alert” in Pirelli magazine, the cyclist Alfredo Binda proudly declared: “I’m in with the Gran Premio Pirelli – I’ve given my word and accepted the post.”

During that post-war spring, the great cycling champion, who had quit racing ten years previously and was about to become the Technical Commissioner of the Italian cycling team, had been hard at work going around Italy to organise the first Gran Premio Pirelli, “a gigantic cycling race for amateurs, with ten regional elimination rounds and a finalissima, with thousands of cyclists involved, and two and a half million lire’s worth of prizes”. But there was more, for each competitor was to be given three top-of-the-range Specialissimo Corsa racing tyres from Pirelli. Binda had got the idea long before from Arturo Pozzo, a top manager in the Tyres section of the Pirelli Group, receiving his wholehearted support. “As far as I’m concerned, I can say, without fear of contradiction, that the Gran Premio Pirelli is the authentic Italian Championship for Amateurs”, said Binda in an article entitled “New champions of the G.P. Pirelli”, which he himself signed for the magazine in July 1949.

This was the start of the first Gran Premio Pirelli, with local elimination rounds in ten regions in Italy. These races had “prizes and assistance, down to the smallest technical details”, recalls Nino Nutrizio again, in “The success of the G.P. Pirelli”, in the magazine that hit newsstands in November 1949. “The first five in each elimination round were duly invited to the test in Milan. And another 50 were given a chance to put themselves to the test in the repechage… On the morning of Sunday, 9 October, 120 amateurs lined up in the Milan Arena, waiting for the start of the finalissima”. They left Milan and headed for Treviglio, and then on towards the Varesotto: Varese, Tradate, Saronno and then back down towards Milan for the final sprint in the legendary Velodromo Vigorelli. And it can hardly be a coincidence that also the construction of the shrine of cycling in Milan was championed by Giuseppe Vigorelli, who long held the same position as Arturo Pozzo at Pirelli. The Gran Premio Pirelli of 1949 was won by the twenty-year-old Loretto Petrucci of Pistoia, racing for the Nicolò Biondo cycling club of Carpi: a young man who was not entirely unknown, since he had already been part of the Italian national team a couple of years previously. Petrucci’s career was not long but it was certainly intense, for he won the Milano-Sanremo twice on his Bianchi in 1952 to 1953.

The success of the 1949 Gran Premio Pirelli was also acknowledged by the – often critical – pen of the great journalist Nutrizio: “Pirelli is meritorious like no other for this policy, putting young people back on track. When will we see something like this also in other sports, which need to tap into the boundless breeding grounds of our people in order to find tomorrow’s champions?” “Like in sport in general, it’s a symbol of health and youth,” said Alfredo Binda in a flash interview published in Pirelli magazine no. 1 of 1950, “The Gran Premio Pirelli is a symbol of the future for the promising young talents of Italian cycling.” Right from the beginning, Binda himself had wanted the event to be called the Primo Gran Premio Pirelli – the first Pirelli grand prix – for he was convinced that others would follow, year after year. And indeed they did, for almost a decade.