The English Love an Italian: With Toleman in F1 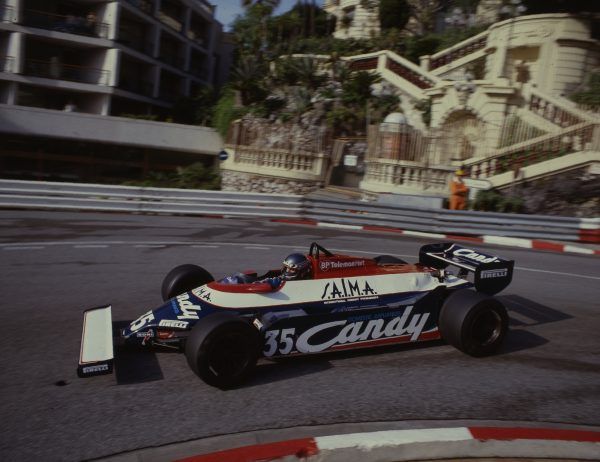 The Toleman racing team that lined up with Pirelli for the Formula One championship in 1981 was quintessentially English, and together they had won the European Formula 2 Championship the previous year. For the Italian tyre manufacturer, it was a return to the apex of motorcar racing after twenty-five years away – years spent consolidating its position in rally racing, where Pirelli was the kingpin. “Pirelli back with the P7” was the title of Fatti e Notizie, the company’s house organ, prudently adding that “… the participation of the fledgling team will necessarily be experimental in nature…”. Pirelli had been away from the world circuits for far too long.

An entirely British story, were it not for those Italian tyres. But the fact is that the English in Oxford love the Italians, and better still the Milanese: for the benefit of fans and the press, the “wedding” between Toleman and Pirelli was celebrated in the Galleria Vittorio Emanuele. Ted Toleman, the principal of the team, was English. He was the grandson of Eddie, who started work as a road haulier for Ford in 1926, first at Old Trafford, near Manchester, and then in Brentwood, so he could be close to the auto giant in Dagenham. As the Toleman empire of juggernauts expanded in the 1950s, his father Albert raced in British rallies. Also Bob, Ted’s brother, was into car racing but, in September 1976, he lost his life in a Formula Ford single-marque race. But a true Toleman does not back away from the risks of racing: motorsport is a mission, to be continued also by launching one’s own team, bearing the family name. And thus it was that, in 1977, Toleman Motorsport was set up in Witney, in Oxfordshire. The general manager, Alex Hawkridge, was English too. The weekly Autosprint, the bible of motor racing in Italy, referred to him as “adventurous, bordering on the buccaneering, an extrovert, with inclinations that hardly seem to be those of a Franciscan tertiary, thrilled by the idea of spending an adrenalin-fuelled weekend”. In other words, a flower-child petrolhead. Right from 1968, he was the Toleman brothers’ trusted track-mate.

The designer Rory Byrne was South African, but by this time naturalised British. He had graduated in Chemistry from Witwatersrand University in Johannesburg, but his true love was racing cars. Not just driving them but also, and especially, designing them. Because he had a way with aerodynamics: it’s said that, as a boy, he built balsawood gliders that were the star turn in endurance contests, performing amazing aerobatics feats before triumphantly disappearing into the sky. In 1972 he emigrated to the UK and found himself designing racing cars for Royale Racing, where he began to put everything he had learnt about the air to good use, and started out on his way to fame. The meeting with Toleman was almost inevitable, like an encounter in an English club. The engine was English, made by Brian Hart Ltd, which for some years had been working independently, after cutting its teeth on Ford Cosworth engines. Brian Hart came from the world of aeronautics from the glorious de Havilland Aircraft Company, but he had always had a passion for racing, from Formula Junior to Formula Two. The drivers were English. Brian Henton, a thirty-five-year-old from Castle Donington was already thinking of holing up for the winter with Can-Am, Paul Newman’s team, but he had been called back to Europe to race with Toleman. Number 35 in the season that was about to begin would be Brian: first driver. Number 36 was Derek Warwick from Alresford, who came from Formula 3. Together they had won the European Formula 2 Championship in 1980, with none other than a Toleman fitted with Pirelli tyres. Now was the time to make the great leap forward.

“Necessarily experimental in nature”, Pirelli had immediately cautioned. The team certainly was innovative, but this was its first time in the top tier. The Toleman-Hart Tg181 was heavy and not very reliable. In a word: it was slow. There was no way of qualifying before September. The Monza Grand Prix: Henton managed to get into the last race, and ended up tenth. One month later it was Warwick who managed to qualify for Las Vegas: pulling out of the race with a broken gearbox made it almost painless. Now there was light at the end of the tunnel. Then came the new seasons, and the Toleman TG181 became the TG183 and then the TG183B, and on it went. Warwick became the first driver, flanked by the Italians Teo Fabi in 1982 and Bruno Giacomelli in 1983. The first points in the standings came at last, in Holland, and immediately after at Monza, at Brands Hatch, and in South Africa. And then… then came 1984. That magical, exclusive British-Italian bond broke apart. Warwick left his place to the up-and-coming Ayrton Senna, and Giacomelli was replaced by the Venezuelan Cecotto. Then came the divorce from Pirelli. In May 1985, Toleman was taken over by Benetton: almost a Brexit…