The Cinturato CN72, Towards the Low-profile Tyre 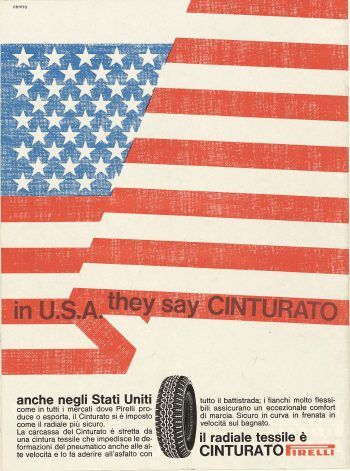 “The new Pirelli Cinturato for the new Camaro” was the headline on the 1967 press release that announced the historic arrival of the Cinturato in the United States. To equip what was seen as the great rival of the Ford Mustang in America, Pirelli technicians worked on new structures and on a new tread that were different from the “European” Cinturato: “… since this is an American car, a tread with a longitudinal pattern has been chosen, because as well as ensuring maximum rolling speed and a quiet ride, it also has the greatest resistance over extended mileage, thanks to its regular wear. The structure, both of the casing and of the belt, is particularly robust so as to cope with the great power of the Camaro engine. This ensures a smooth ride and a sporty feel when driving, which is particularly appreciated by European drivers”. This led to the Cinturato CN72, with a complex design based on a blossoming of longitudinal and transversal blocks.

In the meantime, the upward segmentation of the automotive market in Europe in the mid-1960s led to the introduction of the Cinturato S and the Cinturato HS, which in 1967 started to adopt the new CN72 design, which offered a more comfortable and silent ride. The CN72 was fitted on all Ferrari cars and on the Maserati 4000 and 5000, and later on the Lamborghini 350 GT, 400 GT, and Miura.

While the Cinturato CN72 continued to be used for standard-profile sizes, the availability of low-profile sizes increased with the addition of the Series 60 and Series 70. The CN12 tread pattern was designed for the Series 60 and was used on cars such as the Lamborghini Miura P400, Jarama and Urraco, and on the Maserati Bora.