The Cinturato 367, an International Patent 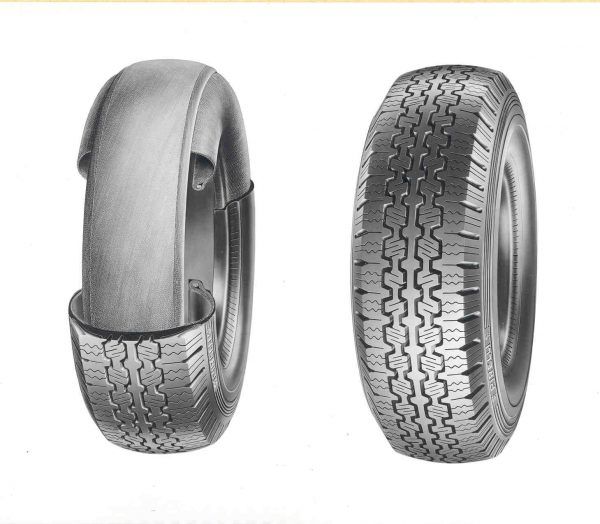 “After five long years of study, we have manufactured and launched a new tyre called Cinturato, based on completely different criteria from those of the past. The key difference in its structure is that of a robust fabric belt placed between the tread and the carcass. Special solutions have been found for the latter, giving it a degree of solidity that gives it a far greater ability to withstand wear and tear.”

This is how Pirelli announced the creation of the radial tyre in its 1952 budget report: it was the Cinturato, which would revolutionise the world of tyres, as well as that of road transport vehicles.

With its broad, square, rigid contact patch that ensured maximum grip when cornering and superb handling in sporty driving, right from when it was launched on the market in the mid-1950s, the Cinturato was recommended for the fast, powerful Alfa Romeo Giulietta Sprint, and for the legendary Lancia Aurelia B20, as well as for the Fiat 8V: in other words, it was just the tyre for victory in the Mille Miglia. It was perfect for true sports car drivers, who were happy to do without the comfort offered by the traditional cross-ply type in favour of the innovative rigid structure that meant they could maintain maximum speed when cornering. The tread pattern was the 367, which became universally known as the CA67 and CF67: the “face” of the Cinturato around the world, with an ever-expanding range of sizes that reached into increasingly popular segments of the car market.

Over the years, engines became ever more powerful and cars went faster and faster, bringing an ever-greater need for higher levels of road holding: the radial construction with a stabilising belt clearly showed how superior it was. First introduced almost exclusively on sports and super-luxury cars, in the 1960s the Cinturato gradually expanded its range, increasingly opening up different segments of the market, which had formerly been covered by the conventional Stelvio, such as that of the Lancia Flaminia and Appia.
At the top of the Cinturato range, the Cinturato “S” (Speed) was introduced already in 1961 for some Ferrari and Maserati models, and the following year came the Cinturato “HS” (High Speed) for historic sports cars, including those of Porsche and Jaguar. The tread pattern “is still that of the normal Cinturato”, explained the sales bulletins of the time, “A highly satisfactory design, because the belt beneath the tread has proven to be perfect also for high speeds”. It was so satisfactory and so appreciated by the market that it was used again in 1972 for the Cinturato CN54, which brought the low-profile Serie 70 technology, and the new solution with a metal belt, into the most popular segments of the car market, from the Fiat 500 to the Mini, the Fiat 127, and the A112. This was when the quintessentially Pirellian concept of the Serie Larga came into being.