The Cinturato CN36 and the new-generation P7 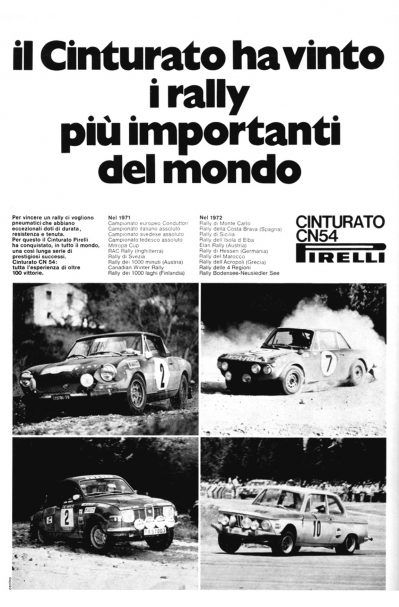 At the dawn of the 1970s the Pirelli Cinturato took the world automotive market by storm. It was for the Cinturato to earn the same name that had first been given to Pirelli Stella Bianca tyres and then to the Stelvio: “the Victory Tyre”. And indeed it did earn the title, in a new motor-racing sport for normal production cars in extreme conditions, which needed road tyres that could tackle asphalt and dirt tracks, stones and ice: rallying.

Pirelli triumphed in international rallies with its CN36 for summer use and MS35 for the winter, on the Fulvia HF, Fiat 124 Abarth, BMW, and Saab. The MS35, in particular, brought a decisive leap towards the development of a new range: Pirelli Winter tyres. The technological impact of rallying on the standard product was almost immediate, and the Cinturato CN54 was launched in 1972. The press at the time pointed out that “this tyre has been subjected to the toughest tests, in the harshest conditions, demonstrating its exceptional qualities in terms of mileage, road holding on both dry and wet roads, impact resistance, strain, and prolonged speed. It has passed the rallying test and is now available for the main cars now in circulation.”

But then, towards 1973, a new challenge appeared on the horizon in the world of rallying – one that would lead to a new revolution in tyres. The car was the Stratos and Lancia intended to use it in rally racing. The problem was that the Stratos was so powerful that even the most effective traditional radials were unable to hold the road: a new invention was needed. Once again, it was Pirelli that came up with the answer for Lancia, in the form of an ultra-low-profile tyre that took the ratio between the sidewall height and the tread width down to 50%, which had already gone down to 70% with the CN72. 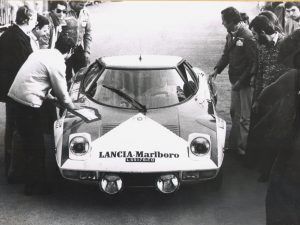 It was a stroke of genius, and one worthy of being honoured in the name of the new tyre: the Cinturato P7, in which the “belt” construction system was a matter of course, with the name written in ever-smaller characters. The new challenges shifted towards the tread patterns and geometries: the P7 was the first step for the new generation of radial-ply tyres.
Today all tyres are radial ply, but the original flair for creating a product that offers high performance out on the track has certainly not been lost: the Pirelli P Zero would not exist today if, seventy years ago, pioneering minds had not tried to imagine a solid casing with a radial structure, tightened by non-deformable belts to ensure a regular square contact area. To win on road and track.