The Pirelli Foundation for a Film on Fangio A Life of Speed: The Juan Manuel Fangio Story, a feature film made by the Argentine production house Cinema 7 Films, is being distributed on the Netflix platform. The film tells the long, passionate life story of the man who is still considered as the greatest car driver of all time. With the wholehearted backing of the family of the driver from Balcarce, the documentary comes vividly to life with an abundance of testimonies from great racing champions of yesterday and today. It has a wealth of vintage footage, based on the stories of those who had the good fortune to know him and to work with him.

The Pirelli Foundation was one of the first to be contacted by Cinema7: as the headquarters of the Group’s Historical Archive, the Foundation holds much of the historical memory of this driver who, possibly more than any other, linked his career to the “Long P” brand. Because, in the case of Fangio, it was not just a “technical” partnership between a racing champion and the manufacturer of the tyres fitted on the many cars in which he raced and won: Fangio and Pirelli formed a bond that went way beyond their professional relationship.
The racing results naturally came first, and Fangio’s long career with Pirelli, from 1949 to 1957, in Formula 1 and in the Mille Miglia, is fully documented in our Historical Archive. Countless photos have been preserved, some of them personally autographed by the Argentine driver. And both Pirelli magazine, and the Páginas house organ of Pirelli Argentina repeatedly wrote about Fangio and his sporting successes.

But then, as we were saying, there was also “another Fangio” for Pirelli. By 1950 the driver was already starring in some scenes of the film Last Meeting. In a photo reportage now in the Historical Archive on the backstage of the film, Fangio plays himself at the start of the Italian Grand Prix: the scene is set in the Alfa Romeo-Pirelli pits at the Monza race track.
Again in 1965, Fangio shot a series of commercials for the Pirelli Cinturato, which appeared on the Carosello programme of the Italian RAI television station. In the commercial, which was directed by Roberto Gavioli for Gammafilm, the driver is seen racing on the Monza track in an Alfa Romeo Giulia GT. Recalling that he had previously raced with the Stelvio, Fangio acknowledged that the Cinturato was “extraordinario”. Our Foundation also has the original photo shoot created by Ugo Mulas on the backstage of that commercial. Also in 1965, the designer Pino Tovaglia created the “Extraordinario” campaign of printed advertisements.

In the following year, 1966, Fangio performed in a second series of Caroselli commercials for the Pirelli Cinturato, again directed by Gavioli for Gammafilm. He made 5 videos in which he recalled the most important moments of his career: the German Grand Prix in 1957, Monza in 1953 and 1956, and Monte Carlo in 1950, as well as two historical sections on tests on the Monza race track in the Alfa 159, which won the F1 World Championship in 1951. Part of that two-year advertising campaign, with Fangio as the actor playing himself, was included in a Cinema7 film on “the man who dominated cars”. So now, enjoy the show! 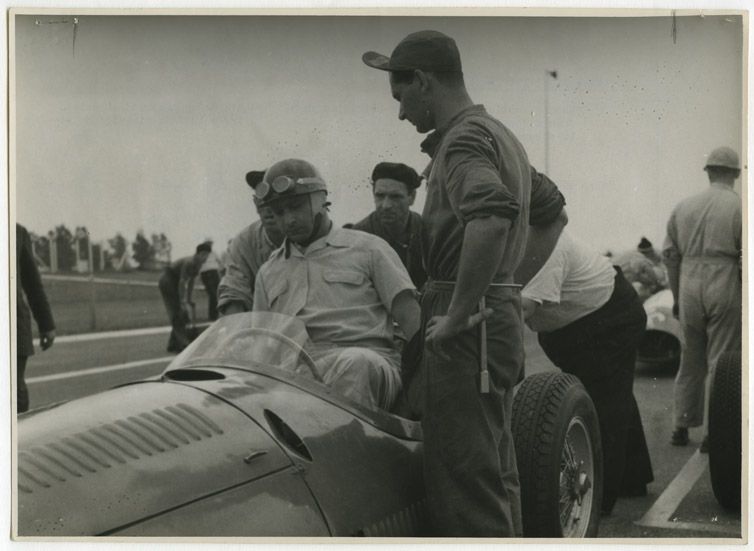