Culture of enterprise is a culture of quality for all 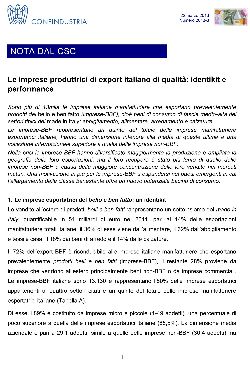 The impresa BBF (the “beautiful and well made” – Bello e Ben Fatto, or “BBF” – enterprise) exists, resists and is making progress. In times of crisis and hardship that appear almost unending, the army of Italian manufacturers that export these “BBF” products are showing what it takes to be successful in the world of manufacturing and are clear indication of how a culture of enterprise leads to a culture of quality in exports. And this is a strategy that is looking to be the only way – at least for now – for Italian industry to make inroads in the current economy.

As such, it is important to understand where these imprese BBF are and what exactly it is that they are doing. How are they facing their challenges, and what exactly is special about their manufacturing techniques? Of course, the most typical examples of Italian beauty and quality are fashion, cuisine, footwear and interior design. And a report that has just come out of the Confindustria research centre, Le imprese produttrici di export italiano di qualità:  identikit e performance (Manufacturers of quality Italian exports: who they are and how they perform), give us a clear overview of the situation, while outlining their key characteristics and future potential.

In just a few figures, Confindustria is able to tell us all that needs to be said in order to understand what a significant segment of the country’s manufacturers are doing.

Accounting for one-fifth of all manufacturers, these imprese BBF all share certain characteristics: they are smaller than average, but they focus more on the international marketplace and have been able to diversify more than the rest, but their recovery has been slower than those of the non-BBF firms. The study also points to another key characteristic: most imprese BBF are either small or very small enterprises, with over half having fewer than 49 employees and a fair number of these having fewer than nine.

In other words, microbusinesses that have great production capacities and a culture that backs that up – a culture of quality and of a form of know-how that, according to some accounts of the crisis, would seem to have disappeared, or at least faded a great deal, but which is actually going strong and should definitely be fostered and made to grow even more.