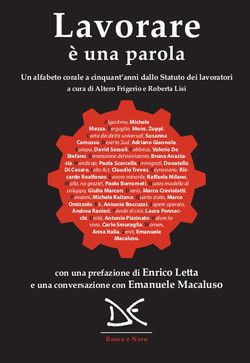 Rewriting the alphabet of work

Working. It’s important to everyone. It’s an act that provides dignity as well as sustenance. Yet even today – and indeed, perhaps more than before – it is a goal that must be won and maintained. The status of being ‘in work’ has strong cultural and material connotations, connotations that affect every social and economic class. And with these considerations in mind, it is both enjoyable and useful to read Lavorare, è una parola. Un alfabeto corale a cinquant’anni dallo Statuto dei lavoratori (‘Work is a word: A harmonious alphabet fifty years after the workers’ charter’), a book just published by various authors, edited by Altero Frigeri and Roberta Lisi.

The collection of 24 essays comprises a sort of dictionary of work, and attempts to pin down some of the key aspects of the theme, using the same number of ‘words’ as a starting point, on which some of the most authoritative voices from the worlds of culture, economy, law and politics share their reflections. As such, a genuine new ‘alphabet’ of work is created, giving tangible meaning to a word that is often abused and distorted. Behind every term selected is a reflection on a crucial aspect of this overarching theme: in this day and age, we cannot discuss work without focusing on the environmental crisis, health and safety and new occupational diseases, migratory movements, the way in which women must reconcile working with caring for others and motherhood, along with themes such as disability, artificial intelligence and the backwardness of Southern Italy.

Nothing is omitted. Not even the more uncomfortable aspects of work, such as the dissolution of entire sectors of the manufacturing industry, the various forms of exploitation, rising unemployment and death. And in the nearly 300 pages of text, there are a few chapters that at first sight might appear out of place – like those dedicated to Bergoglio, to the ‘non-working generation’, to John Maynard Keynes, to the Mafia, to knowledge – but which in actual fact constitute some of the strongest elements of the entire tome.

This book, edited by Frigeri and Lisi, must be read carefully, and will no doubt give rise to further debate and in-depth analysis. It is nonetheless an essential read (and indeed, could even be used as a dictionary, to return to again and again), and is part of the baggage that comes with an increasingly prudent and attentive culture of production.