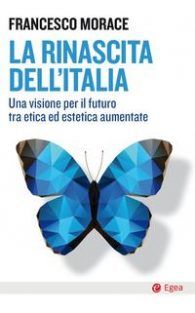 Good business must adopt a global perspective. Any production-based organisation, made up of men and women, that does not have profit as its sole (and very limited) leitmotiv inevitably needs a goal to strive for. But there’s more to it than that, because to know where you’re going, you have to know where you are right now. La Rinascita dell’Italia. Una visione per il futuro tra etica ed estetica aumentate,makes a valuable contribution in this respect. Written by Francesco Morace just before the onset of the Covid-19 pandemic, its content is so much affected by the outbreak that it has now been prefaced by ten observations that take their cue from the book’s central thesis, updating what was written before recent events took hold.

As far as the author is concerned, 2020 marks a symbolic threshold, an arrival and a departure, both a double and a leap year that, as if in a game of mirrors, amplified both problems and solutions, right up to the culmination of the coronavirus emergency. What happened before can be summarised in a series of snapshots corresponding to as many new paradigms (by no means limited to Italy) in which big data, the sharing economy, fake news and influencers all played a central role. As a result, the world transformed, in a short space of time, from how it was before to take on an increasingly digital and therefore subjective, contagious, innovative and instantaneous but also ignorant, evanescent, pervasive dimension; a world that, according to the author, is powerfully and non-transparently steered by artificial intelligence that is itself controlled by a few, by political thought that is as impoverished as it is unscrupulous, and by the aggression of so much communication.

The book explains that what happened nevertheless created new possibilities and vital connections, as well as highlighting ‘a poorly distributed future’ that, for better or worse, is accommodating of individual, civil and social forms of action and reaction.

All of this presents us with a new challenge, and one that is also facing companies and those who run them. The time has come, Francesco Morace argues, to reassert our ability to influence the future and to accept the responsibility that this implies, suggesting a pathway to growth that would lead to a more balanced world, made up of activism and a desire to matter, to take centre stage with our own authentic presence, one that complements our digital presence, all in the name of ‘greater’ ethics and aesthetics with the ability to look out for citizenship rights, to protect the physical world through health and the environment, to nurture actual people, along with their dignity, and to use the power of big data without excess.

The book follows a simple structure, starting with an outline of the context on which the reasoning is based (‘The challenge of greater ethics and aesthetics’), followed by a description of the paradigms on which this new and different horizon could be based. The focus ultimately returns to the Italian situation with the outlining of an ‘8-step pathway to regeneration’ that considers a number of major strengths such as the prospect not only of Italy being a laboratory, an aesthetic haven and a ‘complex place of recognition’ but also of ‘inter-generational exchange’, an ‘outpost of the Mediterranean’ and even, eventually, an Italy that ‘plays a leading role in the third Renaissance’.

Francesca Morace’s book is certainly a visionary one. Not everyone will agree with it, but nevertheless it should be taken for what it is: an important opportunity to reflect, perhaps from an unusual perspective, upon our present and especially our future – something that any good company in any field must do.