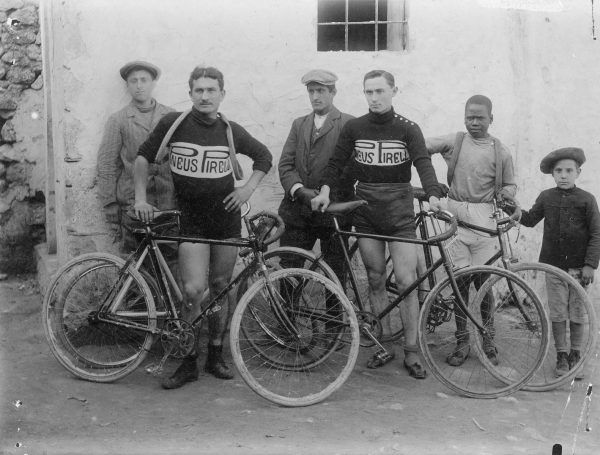 The history of Pirelli in the world of cycling goes back a very, very long way. After making its first technical and consumer items in rubber, Pirelli started a purely experimental production run of tyres for velocipedes in 1890. This was just two years after the Scottish veterinary surgeon J.B. Dunlop had patented them. In 1893, the Tipo Milano tyre for velocipedes, named after the city where the company was based, was patented and by the following year sales had already reached 825,000 lire, accounting for 12% of Pirelli’s annual turnover. In 1899, a racing version joined the road models. Pirelli was also at the forefront in cycling competitions from the moment they started, just as it would become in motorcar racing a few years later.

The history of bicycle tyre production has been preserved in the company’s Historical Archive, as has that of its countless other operations in the world of rubber. In the oldest section of the Archive – that of “Documents on the History of Pirelli Industries”, which can be accessed in the “Documents” section – we find the first patents, catalogues, and advertisements, such as the stunning postcard designed by the artist Aleandro Terzi to celebrate Pirelli’s participation in the first Giro d’Italia in 1909. In another section of the Archive – the one produced by the “Propaganda” department – there are records of the communication and advertising activities carried out in the “velo” sector, as well as in the various other production sectors.

The company used a variety of means of communication, and one of these was racing. There was an awareness that the success of the tyres (for bicycles but also for motorcycles and cars) in the most important sports contests was a perfect way of demonstrating the quality of the product that consumers would then find in the standard road models. This led to hundreds of photographs and advertisements showing how Pirelli took part – and, in particular, achieved victory – in races on two and four wheels. The photographs of the cycling races produced by the Direzione Propaganda, which now join those of motorcar racing already available online, tell the story of the teams fitted out by Pirelli from the 1920s to the 1950s (Bianchi, Wolsit, Stucchi, Legnano), of epic competitions (the Giro d’Italia, the Tour de France, and the Milano-Sanremo) and of less-well-known ones (such as the Six Days of New York and the Six Hours of the Velodromo Sempione), as well as of great champions who made the history of cycling, such as Alfredo Binda, Costante Girardengo, Fausto Coppi, and Gino Bartali. Then there are countless photos of the Gran Premio Pirelli, an international cycling race for amateurs, and the brainchild of Arturo Pozzo. This was promoted by Pirelli with a substantial prize pool, which made it the richest race for amateurs, with a number of regional elimination rounds and a final race in Milan.

Another aspect of Pirelli communication that emerges from these historic photos of the world of cycling is how they were used to convey a sort of indirect advertising message. The finest expression of this can be seen in Pirelli magazine, which published many articles that were of a generic nature, but that made indirect reference to Pirelli products. There were also compositions by poets and writers who took inspiration from the company’s creations. Here we find some photographic shoots that might at first sight seem out of place among photos of products and cycle races, but that were clearly made for advertising purposes. In the post-war period, the great photographer Federico Patellani did a shoot in the countryside, capturing moments of work and leisure. But the real protagonist is the bicycle, which was used to reach the meadows with a scythe or pitchfork, or the banks of a stream to bathe and do the washing. One of these photos was published in Pirelli magazine in 1950 to illustrate an article on the use of rubber in the countryside. In the 1940s, Milani did a service on bicycles in town, in Milan: a sea of parked bicycles, bicycles going by with the Arco della Pace or Piazza Cordusio as a backdrop – chimneysweeps, priests, engaged couples, all riding their bicycles.

The photos of the 1910s are fascinating. They were touched up with white lead in order to be printed on price lists and they can be seen in the Documents on the History of Pirelli Industries section. The work of cataloguing the photographs and other materials has brought out the interconnections between the various archival sources, while the opportunities that the site gives for cross-referencing multiplies the potential for making these links.

The work that has been carried out to enable the publication of, and access to, these photographs starts with restoration work, to ensure the safety of the materials, which were originally fastened to cards with metal staples. Then the photographic shoots are reconstructed, as are the series collected by the production office (these are often pictures of the same event taken by different photographers). The items are then catalogued, with research work into sources both inside and outside the Archive, in order to attribute the photographers, dates, and subjects shown. Lastly, the work ends with digitisation of the original documents.

The Pirelli Foundation is continuing its plans to catalogue and promote this historic legacy, making new archival holdings accessible, in order to tell the story of our corporate history.