The Monza Race Track: Tales of Drivers from our Archives 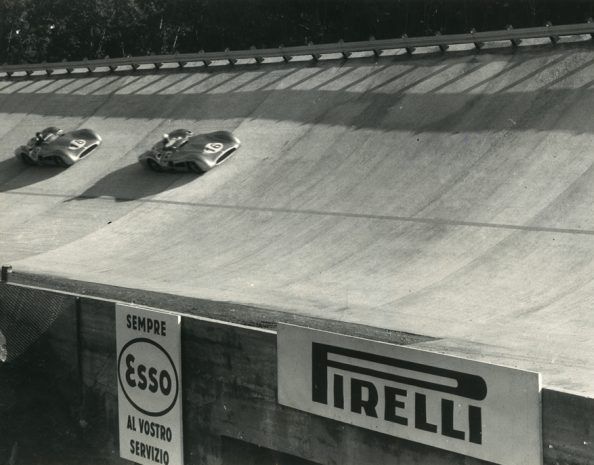 After the Grand Prix of Germany and Belgium it is now the turn of Monza, on 4 September . The race track is indelibly linked to the names of great drivers, cars, and Pirelli tyres. Photographs, press releases, advertisements and articles from Pirelli magazine preserved in the Historical Archive tell the tales of some of the people who made this track famous.

It was 1922 when the first racing cars started blazing the tarmac of the Italian circuit. The first race was dominated by Felice Nazzaro and Pietro Bordino, behind the wheels of two Fiat 804 cars fitted with Pirelli tyres. They declared that they had found their state-of-the-art Pirelli Superflex Cord tyres “extremely satisfactory”.

Alfa Romeo debuted with the unbeatable P2 in 1924.  The car was driven by Antonio Ascari and Giuseppe Campari. And the tyres were Pirelli Cord, of course. That was just the beginning. Campari won in Lyon in August. Ascari triumphed in Monza in October. By the end of 1924, Pirelli Cord and Superflex Cord was proudly titled “the victory tyre” on the price list. The crowning glory came under the banner of the four-leaf clover. The winning streak continued in Monza again in 1925. It was the first Automobile World Championship. And Alfa Romeo and Pirelli were preparing to triumph. But their excitement was overshadowed by sadness. Antonio Ascari was missing from the photograph of the winning line-up. He had died a few months earlier in an accident at the French Grand Prix. In the race that won the championship title, the unforgotten Antonio Ascari was replaced by Count Gastone Brilli Peri, who had been signed up by Alfa Romeo with the hope that the long sequence of accidents and troubles experienced by the gentleman driver would come to an end. That was precisely what happened. Brilli Peri crossed the finish line of the Italian Grand Prix ahead of Campari. Alfa Romeo and Pirelli were named World Champions.

It was 1932. Once again, Monza was the backdrop for what had become a combination of excellence: Alfa Romeo cars, team manager Enzo Ferrari, driver Tazio Nuvolari and Pirelli Stella Bianca tyres. Add a few unforgettable names to the mix – such as Varzi, and also Borzacchini, Trossi, and Brivio – and you have a truly unbeatable team. It was the squad of “Nivola”’s record-breaking winning streak and year after year of extraordinary exploits.

The F1 Italian Grand Prix in Monza in 1950 was nearly all a line-up of Pirelli champions. There were Argentinian driver Juan Manuel Fangio and championship winner Nino Farina in Alfa Romeo. Years of wins by cars sporting the four-leaf clover emblem were bearing fruits: the Pirelli  Stella Bianca tyres (which would later become the Stelvio model) also outfitted the Maserati cars driven by Felice Bonetto and Prince Bira of Siam. Then there was a young Ferrari driver who was determined to show his mettle on the track where he had won the year before. He was following in his father’s footsteps. His name was Alberto Ascari and he was the son of Antonio who had won with Alfa/Pirelli in 1924. He soon become known as “Ascarino”, the little Ascari. He was a Pirelli driver, too, but would die in a crash in Monza on 26 May 1955.

Juan Manuel Fangio won again in Monza in 1965 and his feat was filmed for a Pirelli advertisement. In the advert, he streaked bumpily by on the Parabolica bend in a red spider. Then he stopped, pulled off his gloves and looked straight into the camera. “I used to race with Pirelli Stelvio, but these Cinturato tyres are truly outstanding!“, he declared.