Alessandro Mendini and the Pirelli World 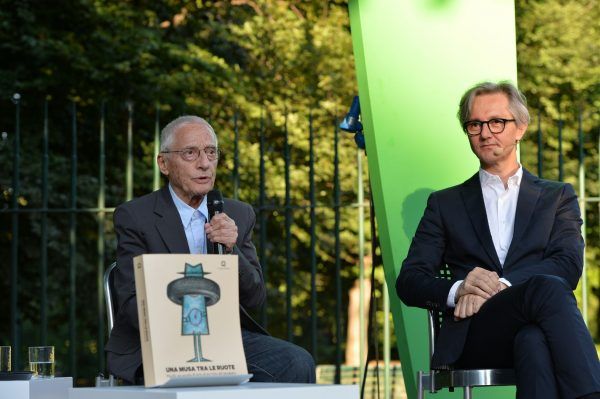 “I was born in Via Jan in 1931. My grandfather Francesco had commissioned Piero Portaluppi to design our house. The care with which he did the job shows what a close understanding the two of them had in inventing this wonderful home, one of the architect’s most sophisticated works.”

This is how Alessandro Mendini recalled the house where he was born, which his grandfather Francesco Di Stefano had built as a home for his whole family. It was here that he started building up an important collection of paintings that has since made his home, Casa Museo Boschi Di Stefano, one of the most interesting contemporary art museums in Milan. Di Stefano’s daughters Fulvia and Marieda lived here with their husbands, Vincenzo Mendini, who was Alessandro’s father, and Antonio Boschi. On the website of the Casa Museo Boschi-Di Stefano, Mendini continues: “In those days, Uncle Boschi had not yet become a top manager at Pirelli and a tireless inventor of ‘rubber-iron’ patents. He was still a young graduate who, with the full backing of his wife, would make any sacrifice to go to galleries such as the Milione, so that he could take home a small Carrà or a little statue by Arturo Martini.” Engineer Antonio Boschi joined Pirelli in 1926 as an employee in the Rubber Technology Department, where he spent his career, being promoted to important positions in the sector of miscellaneous items.

The family ties between Mendini and Boschi led Sandro to create some advertisements for Pirelli, which were published in Pirelli: Rivista d’informazione e di tecnica in 1958. He was still a student at the time (he graduated from the Politecnico di Milano University in 1959), working in an architectural firm together with Mario Brunati and Ferruccio Villa. The advertisement studies were signed by the firm but actually conceived and created by Mendini: five advertisements for various products, ranging from underwater fishing articles to hot water bottles, through to the Cinturato and the Rolle. These were the most successful Pirelli tyres at the time, and he used a humorous take on their shapes and tread patterns to create amusing characters. The young and still unknown Sandro Mendini, who had grown up surrounded by the paintings of Sironi, Funi and Casorati, made his contribution to the golden age of collaboration between the company, intellectuals, and artists. He worked alongside the great names of graphics and design who helped create the company’s corporate image and advertisements under the direction of Arrigo Castellani. The Pirelli Foundation met Mendini while work was under way on A Muse in the Wheels. Pirelli: A Century of Art at the Service of its Products (Corraini Edizioni, 2015). The book was the crowning moment of a project, which ran from 2011 to 2015, to recover and promote the collection of original sketches and drawings. The work of restoration, cataloguing and digitising the materials came after a meticulous study of the works, their authors, the circumstances in which they were made, and the client. The volume was acknowledged by Mendini himself during the presentation of the book at La Triennale in June 2015, where he appeared as a distinguished guest. Mendini praised it as “an incredible book, an extremely challenging cultural work of great documentary quality and methodological criticism”, bearing witness to “the impact of a company on the quality of society”. A work that has shed light on collaboration between Pirelli and one of the greatest Italian architects and designers of the twentieth century.