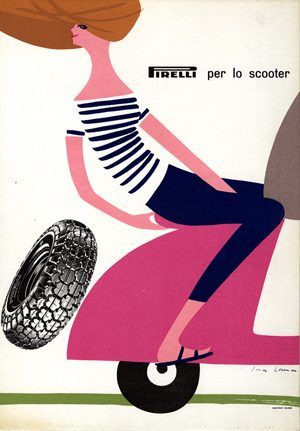 The great designers who have worked with the “Long-P” brand include one who is still today a top name in international design: Lora Lamm. The “Pirelli for scooters” display sign created by the Swiss artist in 1959 was one of the 180 works on show at La Triennale di Milano for the eleventh edition of the Triennale Design Museum. The girl in the T-shirt with horizontal stripes and blue slacks glancing round from the pillion of a scooter has always been the most iconic image for the Pirelli Motor Scooter. This was a tyre the company created just after the war to get the innovative two-wheeled machine racing to the success it achieved in Italy. Yes, indeed, the scooter – whether a Vespa or a Lambretta – was a tribute to the freedom of modern girls. It is hard not to think of the 1953 film Roman Holiday when looking at this “Audrey Hepburn” revisited by the unrivalled pencil of Lora Lamm, with its light, cheerful touch, part-comic strip, part-naif.

Born in 1928 in the town of Arosa, in the Swiss Grisons, Lora Lamm moved to Milan in 1953 after graduating from the Kunstgewerbeschule in Zurich. In the scintillating Milan of the early 1950s, she worked with the great hotshots of design such as Studio Boggeri, where Bruno Munari and Ernesto Carboni also worked with Antonio Boggeri. She then moved with Max Huber to the Rinascente advertising office. Lamm arrived at Pirelli in 1958, when Arrigo Castellani, then head of the “Direzione Propaganda”, asked her to come and work as a freelancer. Lora Lamm made a very personal mark on the advertising style of the Long P company, communicating with a quintessentially feminine touch, with gracefulness, simplicity and modernity. After the girl on the scooter, the little girl hugging her hot water bottle in 1960 became equally famous.

Lora Lamm’s technique soon opened up to collage and photomontage, from Scooter Trasporto tyres, with which one could “go to market fully laden”, through to mountain soles to go up “among the edelweiss” and authentic graphic challenges to depict highly technical objects such as the dam expansion joints made by Azienda Articoli Tecnici. It takes just one yellow brushstroke to create a banana, just one line of stars to conjure up a mountain meadow: drawing becomes a virtual frame for the product. And, of course, her art could not fail to include the bicycle: also from 1960 is the advertisement with the girl in a blue T-shirt pedalling delicately and happily in the foreground. A bicycle with Pirelli tyres, of course. Simplicity and the joy of life, freedom and colours reign supreme in the wonderful world of Lora Lamm.