Design Goes on Show: A Century of Pirelli Stands in Milan 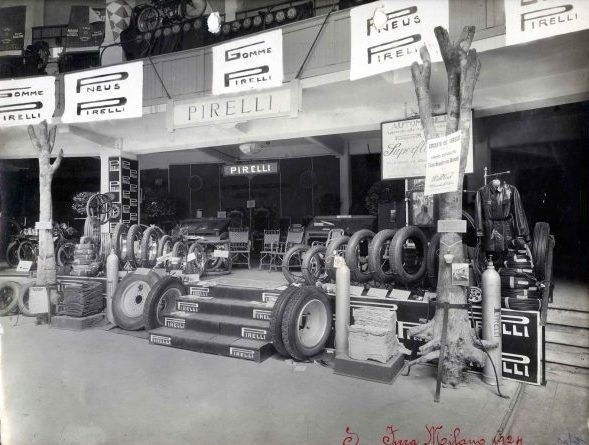 Yesterday there was the Fiera Campionaria, today the Salone del Mobile: April in Milan has always been synonymous with design. Not just that of the great names, but also the quintessentially “popular” design of trade fair stands, showcases that communicate to the general public the full commercial power of a company, in the most effective way possible.

The photographic section of our Historical Archive devoted to “trade fairs and exhibitions” contains a photo from 1924: it shows the Pirelli pavilion at the Fiera Campionaria, the Milan trade fair. This is one of the oldest photos, and an almost unique example of how exhibition “design” was viewed almost a century ago. The stand is packed with objects of all sorts, illustrating a capacity and a diversification of production worthy of the great multinational company that Pirelli had become in the early 1920s. There are the magnificent Pirelli Cord tyres that sped Tazio Nuvolari to victory on a Bianchi motorcycle at the Circuito del Tigullio that same year. There are great rolls of elastic thread and skeins of cables, a number of rubberised fabrics and an austere waterproof jacket. But what is really striking are the two rubber trees: they are real, and they come from the Pirelli plantations in Java. They are there to remind the visitor that that is where everything comes from – from latex, which has become the “white gold” of the West. Four seats in a sort of oriental style invite those interested to stop by at the stand.

Sixteen years may seem a lifetime, and indeed the Pirelli stand at the Fiera di Milano in 1940 had nothing in common with the Art Nouveau version of the 1920s. It is now minimalist and essential. Almost stark. Autarky demanded a search for alternative materials, and not just synthetic rubber in place of the natural variety, but also rayon, made from cellulose, to replace the cotton used for the construction of the tyre casing. “Extra-high strength Italian rayon”, both for the Stella Bianca car tyre and for the Sigillo Verde tyre for trucks: both bore the name “Raiflex”, which put its seal on “the new autarkic tyre”.

Then came the post-war period. And the desire to rebuild. A colour photo shows the outdoor Pirelli stand at the 1951 Fiera Campionaria. Visitors, in jacket and tie, look admiringly at the raincoats from Azienda Arona and at toys made by Azienda Sigma, at advertisements for thresher tyres painted by Bob Noorda, and at those for bungee cord luggage straps designed by Riccardo Manzi. Dominating everything was the new commercial logo, introduced in 1946, with the badge, star, and long stylised P. The economic boom arrived and it is no coincidence that the Pirelli pavilion at the 1961 Fiera di Milano was entirely devoted to holidays – a sign of happiness and well-being. Here we find rubber mattresses and dinghies made by Azienda Seregno, and Azienda Monza boats made with the latest plastics, which have strange names like “kelesite” and “resivite”. They float in the harbour, which for the fair becomes a real sea for real holidays. Because the story behind the product is important – it’s everything.