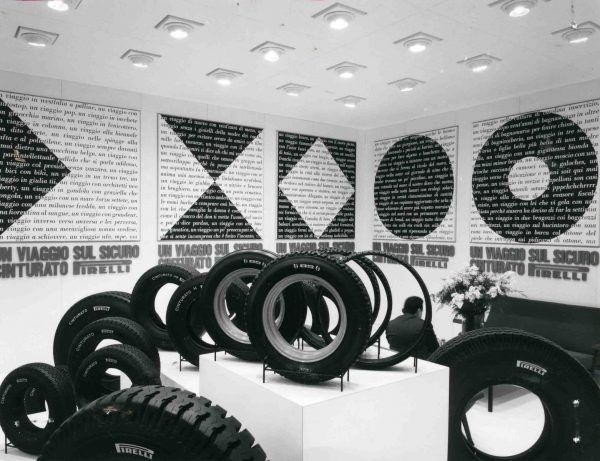 The stories from the world of Pirelli in April 2018 – the month of the Salone del Mobile and Milan Design Week – just had to take a look at those great designers who, in the second half of the twentieth century, helped shape the image of Pirelli by creating the display installations for trade fairs and exhibitions.

We have already seen how, with his “labyrinth” for the Pirelli Coria sole, Bruno Munari made his mark on many of the footwear trade fairs in Vigevano. It was actually one of these, in 1958, that saw the intervention of another of the greatest names of international design: that of Bob Noorda. The army of little stylised figures marching beneath the words “Walk Pirelli” immediately became the symbol of rubber soles: “health has dry feet”. We again find the Dutch artist, who was famous for his graphic precision, at the Paris show in 1960, where he designed the stand for the Pirelli BS3 tyre. And then again at the Turin Car Show that same year, in collaboration with Franco Albini, where he came up with a “story of Pirelli tyres” in the form of a row of circular portholes that formed a timeline of products.

Another name that often crops up in the design of Pirelli stands in the 1950s and 1960s is that of Roberto Menghi, an authentic genius of industrial design. In 1956, together with the great Albe Steiner, Menghi put his name to the pavilion that Sapsa – a Pirelli Group company – devoted to foam rubber at the Milan trade fair. Here, geometrical precision and clean lines were the hallmark of the two Milanese masters of design. An artistic duo, Ilio Negri and Giulio Confalonieri, were coming to the fore at almost the same time in the world of display installations for the Pirelli Group: it was they who created the ingenious display for the Salone del Bambino, the children’s fair at the Teatro dell’Arte di Milano (1959), in the form of toys arranged on an amusing series of dice and domino tiles. The triangular interaction between Menghi, Negri and Confalonieri was to become extremely lively over the years: from the planet-like “constellation” of BS3 tyres at the Turin Show in 1959 to the almost sci-fi parade of plastic containers designed by Menghi and shown in 1961 in the Pirelli-Azienda Monza pavilion at the first IPACK packaging fair in Milan. Together, they also created the tread patterns arranged like sailors in an aquarium at the Frankfurt Show in 1961, and the Cinturato girls photographed by Ugo Mulas for the Paris Show in 1962.

Other names include those of Massimo Vignelli and Ernesto Carboni. It was Vignelli, a Milanese master of design, who created the Pirelli stand at the 1963 Salone del Ciclo e Motociclo (the Milan Motorcycle Show), with the darkness lit up by bright flashes, period photos, and absolute geometric discipline. Tyre treads like trees and lianas in a forest at the Turin Car Show in 1957 were the creation of the eclectic advertising designer Ernesto Carboni from Emilia.

This roundup of great names behind the design of stands devoted to Long P products ends with the brilliant Pino Tovaglia, who worked with the then director of the “Pirelli Propaganda” department, Arrigo Castellani, and designed and created some authentic masterpieces. From the 1956 and 1959 Ciclo e Motociclo events in Milan to the supremely elegant Geneva Car Show in 1962, through to the 1966 Turin Car Show, with the black-and-white geometries of his plates for the “A journey but…” campaign, which he himself created for the Cinturato tyre. It was around this advertising campaign that the Pirelli Foundation based one of its first exhibitions, in 2008, in the spaces of La Triennale di Milano.

Then, at the Paris Car Show in 1967, came a stand that, on its own, sums up a whole artistic period – a whole epoch in the history of advertising: a succession of black and white lines, cut by a red line in the form of a chair. At the centre, just a telephone, black on white. A triumph of Pop Art, and a tribute to the Pirelli Cinturato. 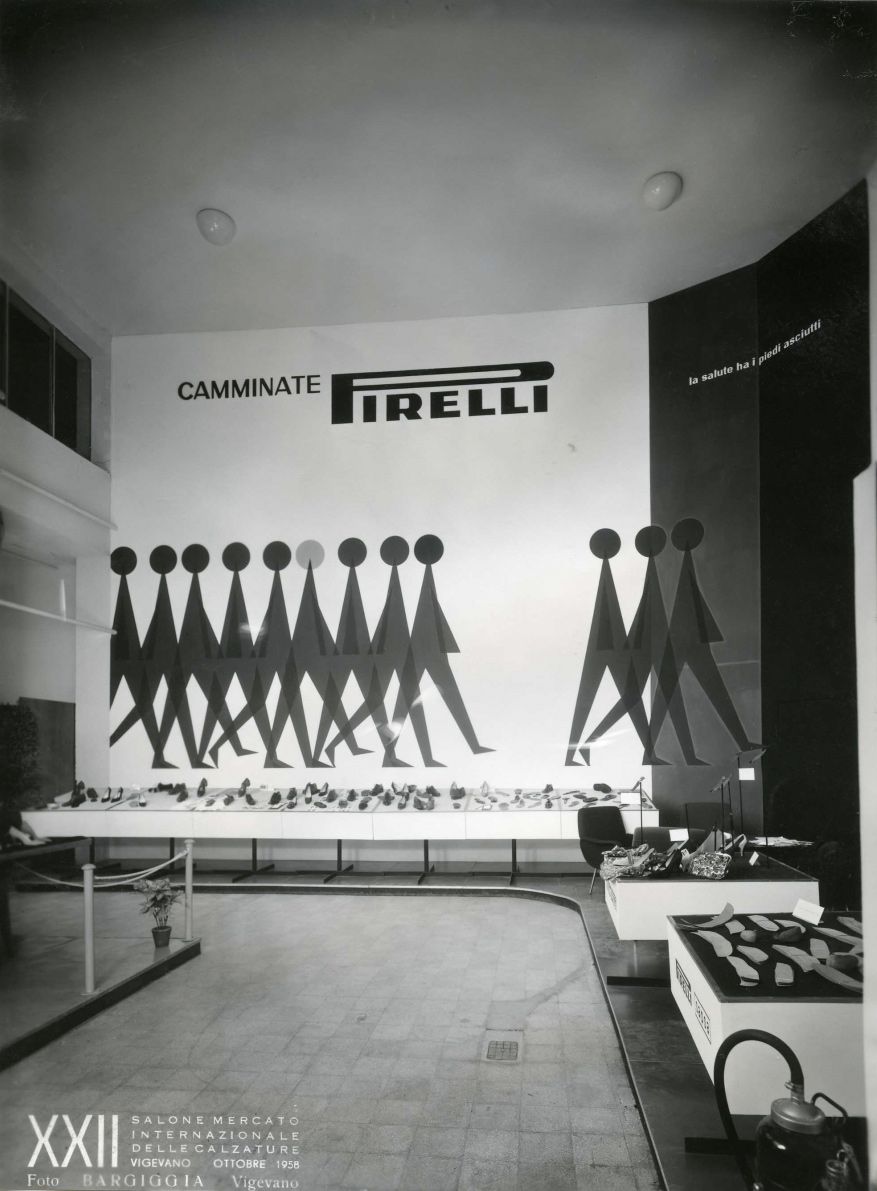