Munari and Coria Pirelli in Milan and New York 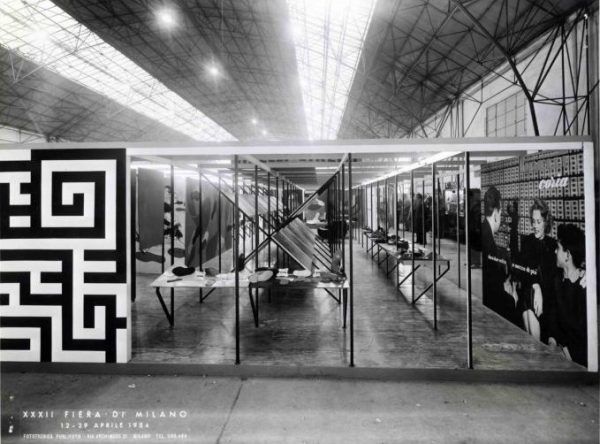 We can call them “designer stands”. In other words, those exhibitions and trade fairs – yesterday the Campionaria di Milano, today the Salone del Mobile, with its Design Week – where the hand of the artist intervenes to give a powerful interpretation to the image of the company being showcased. The creator of the installation is often a designer, who on other occasions lends his own distinctive touch to add greater prestige to the products on show.

This is the case of Bruno Munari and his “labyrinth”, an advertising image created in 1954 to promote the Pirelli Coria sole. Soles and heels had appeared way back in 1889, in the “Catalogue of shaped rubber objects for which the company has the moulds”, and Pirelli continued making them until 1992. But what was the “Coria”, invented in 1951 by one of the many companies working in the Diversified Products sector of the Pirelli Group? It was neither a rubber nor a leather sole, but rather one that combined the two: light, flexible, adherent, waterproof. And, especially, extremely long-lasting. “I haven’t re-soled the shoe – I’ve re-shoed the sole” was the brilliant slogan thought up in 1953 by Joan Jordan for this miracle product.

Also Ezio Bonini worked on the Coria, again in 1953: “withstands the pace of time”, says the footprint walking alongside a precious pocket watch, the hands of which move slowly but inexorably towards 12:44. But it was in 1954 that Bruno Munari made his mark when, to sing the praises of the Coria sole at the Fiera Campionaria in Milan that year, he invented his famous “labyrinth”. This was a graphic itinerary full of traps, but which could easily be overcome by a pair of shoes, naturally protected by Coria soles: waterproof, hygienic, and flexible. And they would last two and a half times as long: it’s like “walking with progress”. An iconic advertisement, and indeed one that entered the collection of MoMA in New York. The collaboration between the designer and Pirelli also included the concept for an advertisement for raincoats, a number of articles for Pirelli magazine and it ultimately led to Zizì the monkey winning the first edition of the Compasso d’Oro. This reinforced foam rubber toy for children was designed by Munari for Pigomma Srl.

So it was in Milan, for the fair that took over the whole city, that the Coria labyrinth was born. Very soon, however, it moved to nearby Vigevano, the absolute capital of shoes, where for many years Pirelli had a stand of its own at the International Footwear Trade Show. The Coria had already made its debut in Vigevano in 1951, beginning to convince customers and trade professionals of its ability to “last longer than a shoe”. In 1955, however, the Pirelli stand in Vigevano reformulated Munari’s original graphic idea and it was a huge sole that dominated the stand at the trade show in 1955, and lots of little soles chasing each other beneath the words “health has dry feet” in the 1956 edition. The age of “alternative” materials, coupled with Salpa leather – neither leather nor rubber – came to Vigevano in 1957. By now, Munari’s labyrinth had become almost a trademark. The 1958 Salone was emblematic: Coria had become an authentic “philosophy of walking”, which produced slogans like “chit-chat does not stop progress: progress walks on Pirelli Coria soles”. At the back of the stand, there was always the sign designed years earlier by Munari. That poster is still in our Historical Archive today.