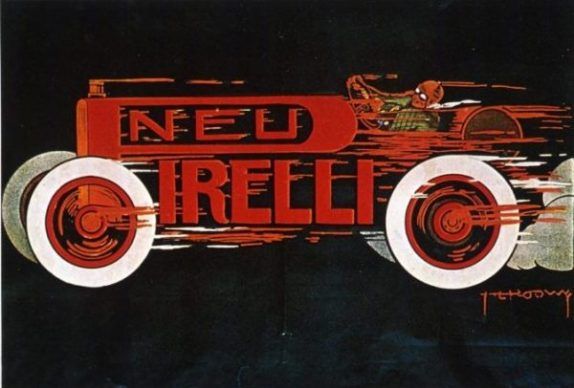 The visual communication of a company is a fundamental part of the story it has to tell about its internationalism. The book A Muse in the Wheels, edited by the Pirelli Foundation and published by Corraini in 2015, is a long journey of discovery into the international breadth of Pirelli’s communication ever since the company was first set up in 1872.

Little is known about Stanley Charles Roowy’s life: he may have been of Belgian origin, or possibly French, but certainly he came from beyond the Alps. It was he who designed the Pirelli tyres in 1914 for that roaring, futuristic red car that was soon to become one of the icons of early twentieth-century advertising. The graphic play between the long P of “Pneus” and the long P of “Pirelli” had already crossed borders, prompting and inspiring the creativity of many international artists. But already the previous year, in 1913, an unknown artist had designed another iconic advertisement, this time for Pirelli Tyres on the British market. On the cover of Land & Water magazine, it came in the form of a fox making a mockery of the pack of hounds chasing it, for it is fitted with the super-fast Italian tyre. Standing over three metres tall, the gigantic poster for that campaign is now on show in the premises of our Foundation, in the area of the Historical Archive devoted to the company’s advertisements. And possibly the entire “global” dimension of those distant pre-First World War years can be summed up in a little sketch from about 1912-15, by an anonymous artist, which is also in our Archive: the subject is again a “pneu Pirelli”, in the French style, which is observed with curiosity and admiration by a series of little human figurines representing all the ethnic groups of the world that were known at the time. But it was after the Second World War, when a strong pro-European wind was blowing, that there was an authentic race among the greatest international designers to try their hand at creating Pirelli’s advertising images. The coming together of such diverse cultures and experiences led to an unparalleled mix of creativity. The first to walk through the door of the Group’s “Direzione Propaganda” in Milan was probably the Swiss artist Max Huber, who had been in Italy since the 1940s, working first with Studio Boggeri and later with Albe Steiner: it was he who put his name, in the mid-1950s, to the cover of a brochure on scooter tyres, using the impression left by the tread as his graphic theme.

A more classic approach can be seen in the “Safety in Speed” advertisement that Pavel Engelmann, a Czechoslovak who had emigrated to the United States, designed in 1952-4 for Pirelli racing tyres, following their evolution from the Stella Bianca to the Stelvio. The dominant colour here was the same red that the futurist Roowy had used forty years previously. And it was Engelmann who opened the doors of Pirelli to the young Dutchman Bob Noorda, who was certainly one of the most prolific and innovative designers of his time. The Amsterdam-born artist created countless works for the Milanese company, including such icons as his Inverno tyres in the form of a fir tree or snow crystals, the first collage for the Rolle, and his attempts to breathe artistic life into electricity cables made of Gommaprene. There was also a valorous posse of French creative designers, ranging from Jeanne Michot, who used the surname of her husband Franco Grignani when signing advertising sketches for raincoats, to Raymond Savignac, with his little man inscribed within the Stelvio, like Leonardo da Vinci’s Vitruvian Man, and André François, who turned the loop of the Long P into the windscreen of a car. The Englishman Alan Fletcher, Kenyan by birth, left an indelible mark on the history of twentieth-century design with his Fletcher/Forbes/Gill agency, and later with Pentagram. For Pirelli, he created such graphic gems as the “+km” for the Stelvio Nylon tyre advertisement and the “Safety in cornering” for the Cinturato. We could not end this overview of great international designers who have worked with Pirelli without mentioning Lora Lamm: of Swiss nationality, she too arrived at Propaganda Pirelli in the footsteps of Boggeri and Huber. Her girl on a scooter in 1959 is still today a marvel of youthful radiance and joie de vivre.