The false dilemma between health and work,
and choices for reopening factories
The exemplary agreement between FCA and trade unions:
safety and production 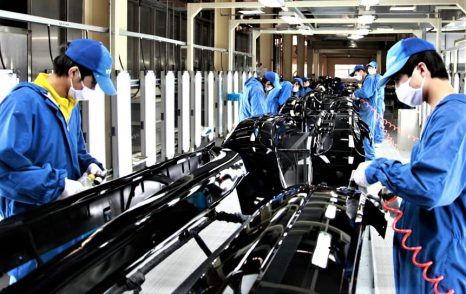 The daily bulletins by the Italian Civil Protection Department keep a running tally of new patients, deaths – which are still very high – and recoveries. Lombardy, and especially Milan, are the worst hit. A way out of the danger is still far off. But, in order not to add more victims – of an economic depression – to the pandemic’s toll, concrete talks about “phase 2” have begun: talks about returning to work and a cautious and gradual reopening of factories, but, first and foremost, talks about taking all the necessary measures to safeguard workers’ health and safety. The whole of Europe is edging in that direction: “Spain is reopening, starting with factories and construction sites,” handing out masks to commuters at the entrances to Madrid’s underground, announced the Italian news agency ANSA on Monday afternoon. Austria is also reopening, with handicrafts shops first. And despite many of its industries staying open, under strict safety protocols, Germany is likewise heading towards “phase 2”, and many German entrepreneurs have asked their Italian suppliers to resume production: “Without Italian parts our industry is frozen.”

And what about Italy? Sections of public opinion, and some government circles, are focusing on the dilemma between health and work, and many accusations are being laid at the door of the businesspeople who favour profit over their employees’ health. It is, of course, a false dilemma, or at worst manipulative propaganda, born out of an anti-business subculture, an anti-industrial and pro-poverty ideology whose rants, unfortunately, fall mainly on the ears of the ruling party, the Five Star Movement. Those in power are seduced by rumours of an IRI-2 structure where the public sector is in charge and business is nationalised, where statism rules, where the Italian “golden power” – allowing public authorities to intervene in market transactions involving strategically important companies – is extended over a very large number of companies in order to freeze international investments (protecting strategically important European companies from hostile takeovers profiteering from their financial fragility is one thing, protectionist nationalism is quite another). But also by anti-EU feelings, by the desire to control every single euro of funding that a company in trouble might need.

It’s a false dilemma precisely because it ignores the fact that people, the “human capital”, are the main resources of business itself. And choices about health and safety have been, for a while, at the heart of massive investments, mainly in Italian companies. Five Star minister Stefano Patuanelli, in charge of the Ministry of Economic Development, knows this well. “Entrepreneurs are not plague spreaders. And without companies this country can’t be rebooted. It’s unfortunate that an unpleasant rhetoric has risen against the manufacturing industries. It’s easy to say ‘let’s shut everything down’ and repeat that like a mantra, but reality must be faced and we need to understand that Italy’s manufacturing system is inextricably tied to various supply chains,” he explained in an interview with the Huffington Post (12 April).

A positive example, which could well be taken as a point of reference, is the agreement signed on 9 April by FCA and the metalworkers’ trade unions (FIOM CGIL, FIM CISL and UILM UIL) in order to resume car production at the factories in Turin and Melfi. The agreement includes strict protocols on masks, temperature checks, distances to be maintained both when working and in common areas (cafeterias, changing rooms, entrances), constant sanitisation of spaces, smart working wherever possible, safety inspections. Both the company and the trade unions agree that this should become the standard benchmark for the whole manufacturing industry, with the blessing of Maurizio Landini, the fierce leader of CGIL: “The agreement with FCA is exemplary, the discussion focused not on when, but on how, to reopen.”

A useful model for the Conte government, too, which in the meantime has not moved past discussing good intentions and ducking choices that, everyone hopes, will soon be made.

Anyhow, in order to properly understand how to proceed, at the end of last week the government appointed a commission comprising 18 experts. The commission is led by Vittorio Colao, one of the best managers in Italy and internationally renowned. And, with him, are economists and other managers of great calibre and experience, like Alberto Giovannini, former president of ISTAT (Italian Institute of Statistics), former Minister of Labour and current leader of ASVIS (Italian Alliance for Sustainable Development); Giovanni Gorno Tempini, president of the Cassa Depositi e Prestiti investment bank; and Roberto Cingolani, chief Technology & Innovation Officer of Leonardo (Italian aerospace, defence and security company), after having led to success the Italian Institute of Technology (IIT) in Genoa. Competent, authoritative, reliable people, who can surely make choices that will reconcile welfare and financial needs, health and production, safety and employment. There is doubt, however, concerning the jurisdiction of the commission led by Colao: is it going to be a top research centre giving advice to the government or an operational facility equipped with powers and means? Naturally, the latter option would be preferable. The fear, which we hope will soon be allayed, is that until now we have been confined within the boundaries of sensational information and brilliant propaganda. Still, one certainty exists: considering their professional and ethical calibre, Colao and Giovannini, Gorno Tempini and Cingolani, would never agree to make a mere, albeit authoritative, token contribution to the current situation.

Be that as it may, this week debates about the reopening of factories in Italy should make tangible progress. It’s what Confindustria and a very determined Assolombarda (representing the provinces of Milan, Lodi, Monza and Brianza) are asking, and it’s what Confindustria’s chapters in the Lombardy, Emilia-Romagna and Veneto regions are demanding. Indeed, Confindustria Veneto and its president Enrico Carraro have applauded the project for the experimental start made by the region’s president Luca Zaia, who evaluated all possible resolutions of health and work, sensibly and with a sense of responsibility. Federlegno Arredo (the Italian national timber association), urges the same with his manifesto “Let’s reopen Made in Italy”, while Confindustria Moda together with the National Chamber for Italian Fashion and the Altagamma committee (companies belonging to the luxury industrial sector), wrote to Prime Minister Conte: “Italy is in danger of losing 50 billion worth of production and export. one out of two companies will go bankrupt if we don’t reopen within a reasonable time frame.” And ANCE, the Italian association of construction contractors, has repeatedly and dramatically declared: “We’re on our last legs.” Colao and his experts are well aware of this general mood, and they’re discussing measures to be implemented, from diagnostic tests performed on an extensive scale to differentiated openings, starting with the fashion, automotive and metalwork industries. The integration of safety and work can be achieved both well and quickly.

“To start again we need a vision, certainty and speed are essential to companies,” summarises Carlo Bonomi, president of Assolombarda (interview in the Corriere della Sera, 9 April), insisting on the necessity and opportunity to “reboot the country and get rid, once and for all, of all the dead weight that slowed us down in the past twenty years.”

Anti-business culture and a drift towards statism and welfarism, when preferred to productivity and competition, can be dead weights, too.

The virus pandemic has revealed the fragility of complex societies, but reaffirms the importance of science, knowledge and good healthcare
Max Weber, the “black swan” and Churchill’s “Keep Calm”: how to face the coronavirus and the recession without giving in to panic, but building the future instead
The closed world, fear and the need to rebuild trust for politics, communities, corporate credit and work
Load more
Grazie per la tua richiesta
Abbiamo preso in carico la tua richiesta, il team della Fondazione Pirelli ti contatterà per confermare la disponibilità.
Grazie per la tua richiesta
La prenotazione al momento non è disponibile.
Thank you! Registration was successful!
We have sent you an e-mail to the e-mail address you provided. Click on the link inside to confirm the registration.
Register
Already registered? click here
Warning! Check the correctness of the data entered.
Enter
Forgot password? click here
Warning! Check the correctness of the data entered.
Forgot password?