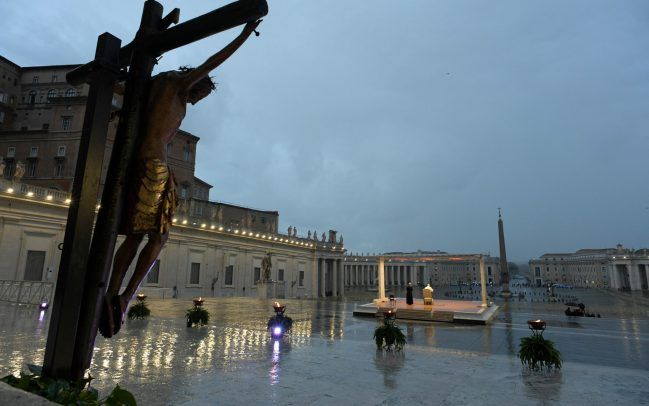 Three images effectively symbolise this extraordinary time of sickness, fear, uncertainty and fragility. The nurse at a hospital in Lombardy resting her head on a table, snatching a moment of sleep, a brief escape from the exhaustion of caring for the sick and dying day after day. The long procession of military trucks in the province of Bergamo, waiting to transport the coffins of the latest victims to a solitary burial. And the Pope, in the deserted expanse of St. Peter’s Square, taking the pain of the wounded world onto his shoulders, and praying that no one be left alone.

These are powerful images that “prick” our sensitivity and the depths of our conscience, as Roland Barthes might say. And they bear testament to a few of the core aspects of the storm that has invaded our lives, our health and the economic and social fabric as a whole: our survival endangered by the spread of the virus, the loneliness that accompanies death and, in spite of everything, our shared commitment to tackling the emergency together, as we already begin to discuss how we can fight our way out of the health crisis and the deep economic recession that affects us all.

It is therefore clear that we have a duty to think of solutions, and ensure that these are implemented promptly, in order to claw our way out of these terrible, painful days. And we must do so urgently. In the depths of bewilderment and fear, we cannot abandon our hopes of recovery.

Beyond the uncertainty, and despite a number of controversial judgement calls, the Conte government is behaving with a sense of responsibility. The Italian people are doing well. Those most exposed, those on the front line – doctors and nurses first and foremost – are labelled exemplary by international observers and public opinion makers.

Those in the business world in particular, who are engaged in civil society, know they must place their resources, knowledge and skills at stake in order to build businesses that are more balanced and fairer, for a better future.

Businesses represent key social players, a driving force for work, income, culture, positive relations, innovation and solidarity. Businesses are active members of the community, and now in particular, they are called upon to undergo challenging processes of production reconversion, switching from traditional activities to the manufacture of health care products (respirators, masks, emergency equipment, medicines, etc.). Driving forces to relaunch the economy as soon as conditions allow. The “social capital” of businesses – the women and men of which they are composed – has always been at the heart of change and progress.

They are the very foundations of the concept of “do, and do good”. Businesses bear witness to a series of positive values (something we have discussed numerous times in this very blog). Businesses, then, must be valued, saved, and supported in order to grow.

And indeed, in the world of business, the appreciation for the exhortation by the President of the Republic Sergio Mattarella is clear, as he calls upon the EU to discard old political and economic strategies and rebuild the networks which unite us with generosity and foresight, salvaging and renewing the values that inspired the founding fathers of Europe, liberal democracy and open society.

A similar political and ideals-based inspiration drives one of the great “fathers of Europe”, Jacques Delors: “The climate that currently appears to reign among the Heads of State and Government, and the lack of European solidarity, are placing the European Union in mortal danger”.

Today, an extraordinary joint investment programme is essential; a programme that uses all of the monetary and financial incentives – both traditional and innovative – at its disposal, in order to tackle the emergency with which we are faced, safeguarding businesses and work, but also beginning right now to reinforce the European networks of common infrastructures, both material and digital, which lie behind scientific research, health services, training, welfare and energy. “Without a joint plan” for Europe, “no country, not even the richest, will be able to get out of this terrible crisis”, states the EU Commissioner for Economic Affairs, Paolo Gentiloni – and with good reason.

Despite the odd lack of clarity and certainty in their communications, the ECB has been heading in this direction, ensuring ample liquidity for European banks, which will then be made available to families and businesses. Meanwhile, amid contradictions and internal tensions, the European Commission has declared the Stability and Growth Pact to be “suspended”, to enable the member states affected by the impact of the “great contagion” to cope with the crisis.

It is now a question of finding suitable financial and economic instruments, or whatever the joint common bonds that may be rolled out are called. And, looking ahead, a number of decisions will need to be made with regard to new industrial, fiscal and social policies, and these must be appropriate to the times. The revival of Europe. In spite of everything. In spite of short-sightedness, national self-interest, and the increasingly closed-minded public opinion, scared and seduced by the demagogues of new nationalism. In spite of a narrow ideology of rigour which, behind the smokescreen of a justified focus on achieving a balance of the public accounts, is unable to take these new, significant social needs or the political – and indeed, moral – challenges posed today by the health emergency, into account. Indeed, this emergency is serving to further exacerbate the existing social imbalances and rifts that have long been highlighted not only by Pope Francis and leading voices in economic literature, but also by leading conferences in the world of business, such as the World Economic Forum in Davos.

Buoyed up by his international experience as a civil servant and his expertise as a sensitive economist, in his article in the Financial Times, Mario Draghi doesn’t talk about Italy, but rather, Europe as a whole. And indeed, he has indicated to the EU which route they must take in order to save the European institutions, and to meet the expectations concerning the development and the well-being of its citizens: “We are engaged in a war against the coronavirus and must mobilise accordingly… Much higher levels of national debt will become a permanent feature of our economies, and will be accompanied by the cancellation of private debt… The alternative would be the permanent destruction of production capacity and fiscal foundations”, he wrote in recent days. This debt is not designed to support welfare, but rather to bolster businesses and safeguard jobs as key drivers for recovery. Draghi calls upon the EU to intervene with “strength and speed”. “Speed” above all, because “the cost of hesitation may prove irreversible” – serious damage to the whole of the EU.

Draghi therefore appeals to all European decision-makers, the ruling classes, to “change their mindset”: the bureaucracy of ideas and beliefs (and special interests) of the past cannot help us to weather the current storm.

We must conceive of “an economy of affection and not only of rules”, to recall the thoughts of one of Italy’s greatest economists, Federico Caffè (who taught Draghi, among others). An economy that keeps people in the foreground, and combines competitiveness with solidarity and support, taking an approach based on intelligence and humanity.

We return to Keynes’ lesson (indeed, Caffè was an early commentator on this). And to the ideas of George C. Marshall, eloquently expressed in a speech given at Harvard in June 1947 (referred to a few days ago by Mattia Feltri in La Stampa): if the world does not return to normal economic conditions, the result will be political instability and war, when instead we should be fostering a free and flourishing world.

Indeed, this was the political basis of the Marshall Plan, which is once again the focus of public discourse: providing aid to war-torn nations (including a defeated Germany) to rebuild economies and societies. In other words, a tangible, operational, far-sighted translation of Keynes’ words in “The Economic Consequences of the Peace”, where he criticised the punitive policies against Germany under the Treaty of Versailles, which served to end the First World War in 1919 in an unbalanced, inauspicious manner. A new European Development Plan? A new Delors Plan? Why not? Draghi himself, with his institutional and international competence and authority, could act as a point of reference and guidance.

For the world of Italian companies – open, internationalised and rooted in the markets of the world – the attention (coupled with a strong sense of responsibility and engagement) is focused on a policy of collaboration in which Europe plays a leading role, in dialogue with the US and China. And indeed, beyond the pain and exhaustion, the horizon is clear: we must work together to establish proposals for sustainable, environmental and social development. Businesses have long played their part. With the sensitivity of Italians and of Europeans, citizens of a world that we hope is set to improve.

Max Weber, the “black swan” and Churchill’s “Keep Calm”: how to face the coronavirus and the recession without giving in to panic, but building the future instead
Rereading Keynes and planning investments in health, the environment and scientific research
The virus pandemic has revealed the fragility of complex societies, but reaffirms the importance of science, knowledge and good healthcare
Load more
Grazie per la tua richiesta
Abbiamo preso in carico la tua richiesta, il team della Fondazione Pirelli ti contatterà per confermare la disponibilità.
Grazie per la tua richiesta
La prenotazione al momento non è disponibile.
Thank you! Registration was successful!
We have sent you an e-mail to the e-mail address you provided. Click on the link inside to confirm the registration.
Register
Already registered? click here
Warning! Check the correctness of the data entered.
Enter
Forgot password? click here
Warning! Check the correctness of the data entered.
Forgot password?