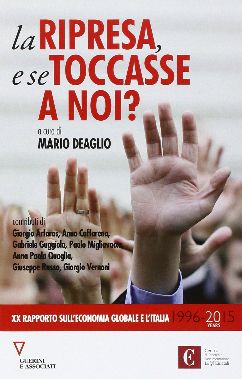 A well-rounded enterprise looks both within the organisation and without. It explores the world for new markets and new business opportunities, and it is this sort of approach that helps to build a focused, competitive culture of enterprise.

The twentieth edition of the economic report published by Centro Einaudi, a research institute based in Turin (and with the support of UBI Banca), and edited by Mario Deaglio, entitled La ripresa, e se toccasse a noi? (Recovery. What if it were up to us?), can help business leaders at all levels to see clearly beyond the factory walls. Featuring contributions be economists and researchers such as Giorgio Arfaras, Anna Caffarena, Gabriele Guggiola, Paolo Migliavacca, Anna Paola Quaglia, Giuseppe Russo, and Giorgio Vernoni, the report explores both change in recent decades and the possibilities for the future, but without coming to any catastrophic conclusions despite finding a world suspended between hope and an openness to new technology and great challenge brought on by the decline of the old economic and political order internationally. The team of contributors to this study write of an economic crisis that is now largely behind us, but which has left us with a problematic outlook for the future and the potential for new sources of energy and “new economic miracles”. In short, this is not a time of hopes and dreams, but of complex challenges to be overcome.

The report is clearly divided into chapters, each of which covers a specific, distinct topic. It opens with “the long wave of change” and an overview of the issues faced by a multi-centred world, of the innovations of the Internet, of changes in the job market, and the globalisation of capitalism, before turning to Italy’s place in such a world as the nation seesaws between growth and decline. This is followed by chapters on the evolution of the crisis, on international economic order, and another look at the situation in Italy.

Some of the conclusions reached in the report may come as a surprise. What emerges is a picture of a lacklustre Europe and an Africa that appears to be shaking off an economic inertia that has lasted for millennia. Italy, conversely, appears to have begun heading down the necessarily long road to recovery, with an outlook that is less bleak and is founded on new markets and new industries. Now, we must look to the developments of the coming months—no catastrophe and no triumphalism, just “quiet and measured optimism” as the report concludes.

This report of Centro Einaudi in Turin provides a good overview of what is happening today in enterprise and will be a useful source of information for some time.