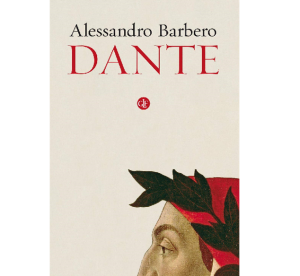 Dante is the succinct title of this biography, written by Alessandro Barbero and published by Laterza, of the man who is the pillar of our literature but also of the many judgments that, reread and reinterpreted over the centuries by such authors as Foscolo, Leopardi, and Manzoni, set out the good and the evil of civil conscience. We already know a lot about him, from biographies and references close to his time (Boccaccio, Petrarch, and the humanist Leonardo Bruni’is Life of Dante of 1436) but there’s still a lot to be interpreted and clarified. And Barbero does it well, with the insight of a historian and the distinctive style of a great writer, telling us of inter-city wars and political intrigues, passions, and diplomatic machinations, as Italy emerged from the Middle Ages and headed towards the enlightenment of Humanism, with all its conflicts, trade, and miseries, and the splendours of its courts – which was revealed to us by Dante himself. About whom it is always worth knowing more.   Dante Alessandro Barbero Laterza, 2020