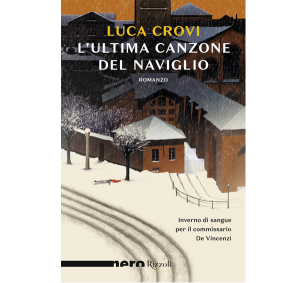 Milan as it used to be, to gain a better understanding of Milan as it is, and to bring out the values that will form the basis of the Milan that will be, once the health crisis and the severe economic recession is over. The city in the late 1920s forms the backdrop for the events narrated by Luca Crovi in L’ultima canzone del Naviglio or Inverno di sangue per il commissario De Vincenzi, published by Rizzoli. In an original blend of respect for tradition and propensity for innovation, Crovi brings back to life the protagonist of the novels of Augusto De Angelis, a great master of Italian-style detective stories. In his investigations of robberies and murders, Carlo De Vincenzi winds his way through the rooms of the police station, out into the Piazza San Fedele, through the streets around the basilica of Sant’Ambrogio, to the Tombon de San Marc (where barges used to unload reels of paper for printing the Corriere della Sera) and along the Navigli canals. This was the time of the ligéra, the Milanese underworld with strong popular roots and the age of modernity at breakneck speed, when cars and industry were replacing bicycles and handicrafts. But also the time of arrogant fascism, which had taken hold and was attempting to dominate not just politics, but all aspects of social and civil life. L'ultima canzone del Naviglio Luca Crovi Rizzoli, 2020