Economics on a human scale – a modus operandi 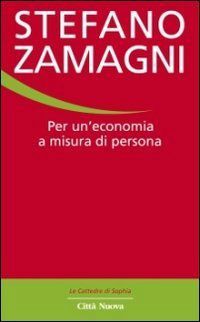 A journey towards the so-called economy of sharing, closer to people and more focused on others yet without neglecting profits. A short trip through the number of pages used along the way (not even one hundred) and throughout the history of economics, of business and of living in society, studded with names which, for various reasons, arouse and have aroused discussion in the West: Plato, Aristotle, Keynes, Darwin, Pope Benedict XVI and Adam Smith. What Stefano Zamagni (Catholic economist who for years has sought to bring economics and management back to a vision closer to humankind) achieves in Per un’economia a misura di persona [“Towards Economics on a Human Scale”] is progress, not always easy but very interesting, towards an objective which answers a question: “is it possible to make markets civil and therefore an environment which civilises all of society?”. In other words: does it make sense to pursue an economy which succeeds in “setting a value on both human dimensions, expressive and acquisitive, and not only acquisitive as is the case today?”. Zamagni explores a delicate and complex area of economics, business and social living, an area which attempts to bring together concepts such as those of “sharing”, “reciprocity”, “brotherhood”, “equality” and “liberty” with those of “markets” and “profits”. He does this using a vast apparatus of economic, philosophic and moral literature and giving examples such as that of Chiara Lubich and the Movimento dei Focolarini, and also recalling the epic stories of Ulysses (who defeated the sirens by tying himself to the mast of his ship and therefore temporarily denying himself freedom) and of Jason (who instead managed to beat them without denying himself freedom but by combining rationality and reasonability).

All this to demonstrate how to arrive, as the title of the small book says, at an economy on a human scale (made up of freedom, equality and brotherhood) which, according to the author, is the only one able to relaunch modern society, battling a crisis unlike that of 1929 and instead more complex, profound and structural.

Per un’economia a misura di persona