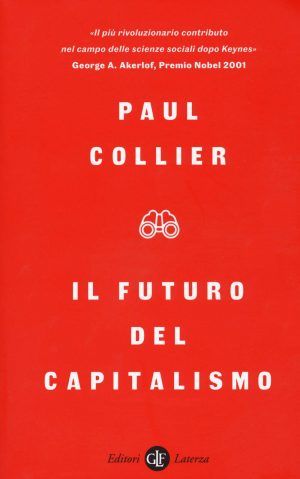 Paul Collier’s latest book, now available in translation in Italy, describes the crisis of modern capitalism and shows the road we need to take in order to get out of it

Capitalism is on the ropes: a problematic present, an uncertain future. Social and economic systems are finding themselves forced to revise their principles of conduct, and fast. Walls on one side, and gaps on the other. Juxtapositions, rifts, anxieties. These are the themes around which the latest book by Paul Collier – Professor of Economics and Public Policy at Oxford and former director of the World Bank’s research department – revolves. “Il futuro del capitalismo” (the original title of which is The Future of Capitalism) has just been released in translation in Italy, and is a great read for anyone who wishes to focus on the broad theme of the current state of capitalism and the way in which it is developing (including in light of the most recent emergencies).

Collier begins with a vivid description of the reality in which we find ourselves today, where new and deep-rooted contrasts and juxtapositions are tearing up the social fabric of Western societies: big cities versus poor provinces, highly-specialised elites versus the masses of low-skilled workers, rich countries versus poor countries. These conflicts are giving rise to new anxieties, new anger and new political passions.

On the basis of this situation, the author discusses the need to re-found our ethical principles, beginning with the very foundations of morality and then moving on to the ethical State, ethical business, families and the ethical world as a whole.  In this section of the book, among other things, Collier cites a number of examples of companies such as GM and Toyota, drawing attention to crucial issues such as the relationship between profit and the other goals of production organisations.

Having concluded his description of reality as it currently stands and after an exploration of the potential for a recovery of ethics, Collier then goes on to analyse the fundamental elements required for a “reconstruction of inclusive society”, focusing on both geographical divides and those pertaining to social class.

The author’s conclusion is this: the only way to ensure a dignified life for all is if capitalism succeeds in creating an ethical foundation for itself, rendering it fair and compassionate, and not simply efficient and economically thriving. In other words, a capitalism in which dignity and reciprocity prevail over aggression, fear and humiliation – the core characteristics of our “rottweiler society”.

Paul Collier’s book is a brilliant, fascinating read – it doesn’t shy away from issues, but nonetheless offers a potential route towards a new path for renewal – one which, in light of recent events, is even more necessary.