The culture of small enterprise 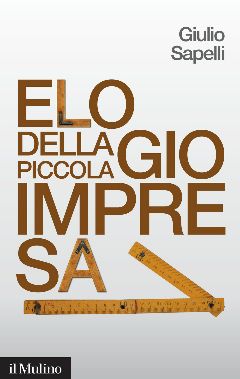 Long live small enterprise, able to hang on in spite of it all, making Italy what it is by opening up every morning and not going home till night. This is the typical idea one has of the small business, but what are they truly like?

The most recent snapshot of Italian small enterprise has been taken by Giulio Sapelli – economist, economic historian and a university instructor with experience working in many businesses – in his book Elogio della piccolo impresa (In praise of small enterprise), a concise work of just over a hundred pages and which unites business theory and history to draw a bitterly realistic portrait of the small-scale manufacturer in Italy – businesses often doomed to be crushed by an economy that has no room for them, but which still manage to reinvigorate themselves by taking advantage of unexpected resources and an extraordinary culture of enterprise.

Beginning with a theoretical overview mixed with testimonials from businesspeople in a range of industries, Sapelli then looks into a number of key aspects such as the role of the business owner’s family, relations with banks and with government (as delays in payment loom), and the contribution of youth (with generational shifts being a determinant factor for small manufacturers), all up and down the Italian peninsula where these businesses have made history. In the book, Sapelli describes the characteristics of small-scale manufacturing in Italy today: “It is based on people and so an trust, on the unending flexibility that families and individuals are capable of in the face of countless missteps. And this is why we are seeing a sort of homeostasis with the market and politics, which our social construct forms and reforms in the midst of a vital economy and other contexts. But this is not growth because it is something that is created prior to and outside of the marketplace. Certainly, it acts within the marketplace, but it defends itself from the market in the face of attacks on its individual and family makeup. It seeks to survive. Of course, it could grow, but then it would no longer be small enterprise.”

Both theory and practice through numerous experiences as told by the business owners themselves. The result is a breath-taking race through recent Italian industrial history, looking at businesses both inside and out, as well as the risks of the present and the challenges of the future.