A year of Pirelli libraries. Conversation between books and food 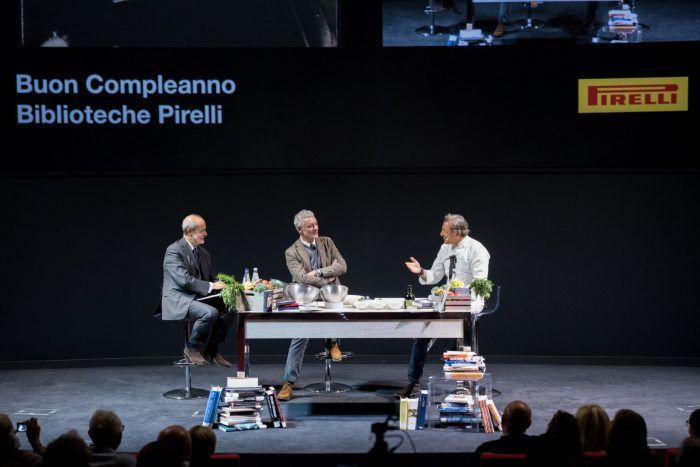 On 20th November, we celebrated the first-year anniversary of Pirelli corporate libraries, discussing books, good food and Milan. A sociable dialogue between the writer Alessandro Robecchi and Chef Filippo La Mantia, in the company of the director of the Pirelli Foundation, Antonio Calabrò.

Alessandro Robecchi has written noir books set in Milan and, in good tradition for this genre, from Black Wolfe to Inspector Montalbano, and Carlo Monterossi, the table has always been the focus around which we have conversed and cooked. There was talk of Milan, the Milan where Alessandro Robecchi grew up, and the Milan that has been able and continues to welcome immigrants from all over the world, as Filippo La Mantia recalled. Food was one of the main topics of the evening, from spleen sandwich to famous Adalgisa di Gadda risotto, and even the couscous prepared for the occasion by the chef from Palermo. Food and books: a combination that is also about cultural exploration.

A year for the new corporate libraries but almost a century of Pirelli libraries and initiatives aimed at promoting reading and culture. The evening was an opportunity to tell the story of a company that wanted to and continues to want to play a leading role in the promotion of culture on the Milanese territory, formerly with the first Pirelli library founded in 1928, which was active during the last century, and now also with the Pirelli Cultural Centre, a place of great cultural ferment, which has welcomed many artists and writers of the Milanese culture and beyond.

And then Milan, at the centre of the exhibition entitled “Visioni milanesi: Pirelli racconta la città” (Milanese views: Pirelli recounts the city) which aims at illustrating the city through pictures from Pirelli Magazine and the historical material preserved at the Pirelli Foundation. A visual journey that also portrays the transformation of Pirelli, a company with an international outlook, but deeply rooted to Milan and a constant presence in the city’s social and cultural life.