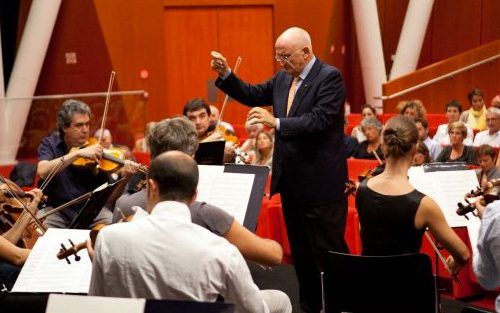 “Uniqueness and excellence, the veneration of sound and the joy of making music, an exciting challenge, with young people and for young people: these are the key features of the Orchestra da Camera Italiana,” says Maestro Salvatore Accardo, talking about the string orchestra founded in 1996 with the best students and alumni of the Accademia W. Stauffer in Cremona. One of its aims is to continue a tradition of musical excellence in Italy and to adopt a different approach the public by modifying the traditional way of having the performers strictly in front of the audience.

Pirelli and Maestro Salvatore Accardo started their relationship in 2012 when the professors of the Orchestra were welcomed to the Pirelli Auditorium in Milano Bicocca to study and work together on a new programme for the concert season that year. The occasion reasserted the link between places of work and those of music as one of the expressions of the industrial humanism that has always been a major feature of Pirelli. Employees also played a lead role by participating with their families in the general rehearsals and, indirectly, in a fascinating reflection on “sounds”, on music and on the effort involved in performing it, in order to listen and gain a personal understanding of what it means to put on a concert, “constructing a performance, in search of the highest quality.

The event was repeated also in the following years, as well as for the young people involved in Children at Bicocca, the company’s welfare activity for employees’ children. This is designed to help families when schools are closed, and those involved had an opportunity to meet Maestro Accardo and unlock the secrets of music.

This year, the desire to seek out highly original new harmonies has led to the creation of a work that conveys the sounds of the digital factory – that of the Pirelli Industrial Centre in Settimo Torinese. The sounds and rhythms of production in the departments gave rise to Il canto della Fabbrica, a composition commissioned by the Pirelli Foundation from the composer and violist Francesco Fiore and specially designed for the violin of Maestro Salvatore Accardo. Led by the first violin Laura Gorna, Maestro Accardo’s Orchestra da Camera Italiana will perform the world premiere at the MITO SettembreMusica Festival, with two concerts entitled ‘La Fabbrica tra le Ciliegi’, putting the spotlight on the cherry trees along the side of the Pirelli factory in Settimo that inspired the composer and that will be the venue for one of the two evenings. ‘La Fabbrica tra le Ciliegi’ will be performed on two evenings of the Festival, which this year is devoted to the theme of Nature: the first will be held on 7 September at the Piccolo Teatro Studio Melato in Milan. The second, on 8 September, will see the music return to the Settimo Torinese Industrial Centre, building on the success of the concerts that were held there in 2010, 2011 and 2014.