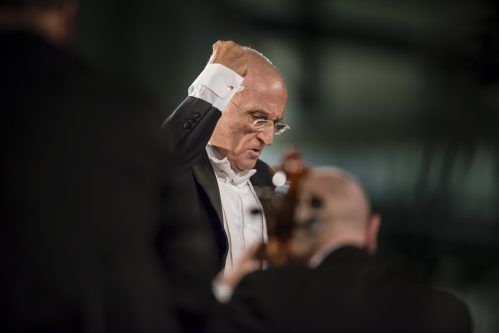 It was back in 1971 when Maestro Accardo, just thirty years old and already considered to be one of the world’s greatest violinists, was invited by Pirelli to take part in the 6th Music Festival at the Pirelli Cultural Centre. On 24 November, in the great Auditorium of the Pirellone in Piazza Duca d’Aosta in Milan, the company’s headquarters at the time, the Maestro, together with the pianist Lodovico Lessona, performed a programme that included music by Petrassi, Webern, Ravel, Mozart and Beethoven, displaying the full potential of the violin, from the classical era to the contemporary.

The bond between Pirelli and Maestro Salvatore Accardo, who in 1996 founded the Orchestra da Camera Italiana with students and former students of the Accademia Walter Stauffer in Cremona, has been renewed in more recent times. In 2012 the maestro and the musicians of the Orchestra were invited to the Pirelli Auditorium – but this time in the new company headquarters designed by Vittorio Gregotti in Milano Bicocca – to work on and try out a new musical programme to be performed during the concert season later that year. The company’s employees and their families also took part in the dress rehearsals.

Pirelli has always been committed to promoting culture in the workplace, and from that moment on it has renewed its bond with the Maestro each year. It has given its support to the orchestra, making the company premises available for rehearsals and having the musicians interact with the employees’ children in corporate welfare activities.

In 2017 the Maestro and his orchestra were involved in a new musical project to create an original work that gave a voice to the contemporary factory – the light-filled, sustainable and “beautiful” Pirelli Industrial Centre in Settimo Torinese. The sounds and rhythms of production inspired Il Canto della Fabbrica, a piece commissioned by the Pirelli Foundation from the composer and violist Francesco Fiore and specially written to be performed by Salvatore Accardo’s violin.

The world premiere of this musical composition was performed in front of more than a thousand people, including numerous Pirelli employees, as part of the MITO SettembreMusica Festival inside the Settimo Torinese plant, the factory that inspired the work.