The Tower in Print 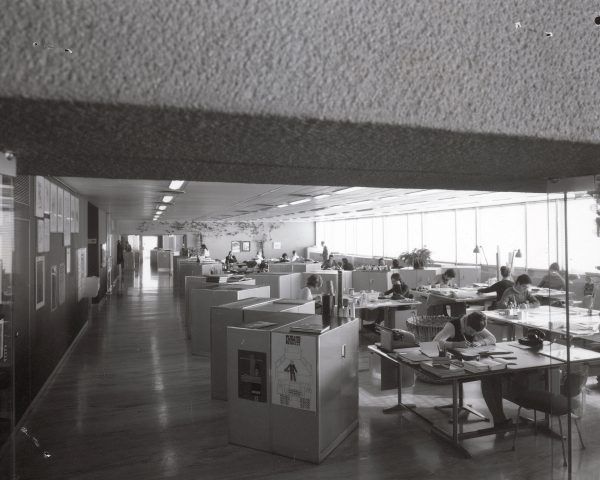 Industrial historians agree that the Italian economic boom lasted from 1958 to 1963, which means the Pirelli Tower came into being right at the apex of what was later termed “the miracle”. One photograph in our Historical Archive perfectly captures the moment: a smiling girl aboard a Bianchina Cabriolet, with the Pirellone behind, symbolising Milan growing and producing. Publifoto’s aim was to capture the spirit of the modern, industrious city in 1960. Two years later it was Ugo Mulas, a thirty-year-old up-and-coming photographer in “swinging Milan”, who made the Bianchina with Pirelli Sempione tyres the star in his shots. This Milanese photographer often used to work on the twenty-fifth floor of the building with the Roman Arrigo Castellani, who was then head of Pirelli advertising and the editor-in-chief of Pirelli magazine. The periodical had been launched ten years previously, in 1948, as the brainchild of the poet-engineer Leonardo Sinisgalli and Giuseppe Luraghi, the manager of Bicocca. The magazine looked out over Milan, Italy, and the world from the top of the Pirellone: with the journalist Nino Nutrizio, it analysed the Olympic Games in Rome and it examined the European Community with the economist Gavino Manca, the head of the Research Office and a close collaborator of the chairman, Alberto Pirelli, right up there on the thirtieth floor of the Tower. For Pirelli magazine, the Dutch photographer Arno Hammacher went up to the top of the Pirellone in 1959 to capture in black and white the work of “Man and the Skyscraper”, as his report was titled in the magazine that same year. 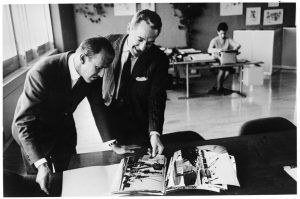 In Castellani’s office, Mulas also used to meet the graphic designers, such as Riccardo Manzi, Bob Noorda, and Pino Tovaglia, who were working with the company at the time. These were years of unprecedented creativity for Pirelli visual communication. The “Un viaggio ma…” advertising campaign was the work of Castellani and Tovaglia in 1966, a masterpiece mid-way between Pop Art and Dadaism that was praised by the writer Camilla Cederna. Arrigo Castellani died in December 1968, and a new era was on its way for the Tower. In 1970, on the tenth anniversary of the opening, the Belgian artist Folon painted a picture of it for the magazine and Dino Buzzati told his “little stories” about it. These gems of masterly narrative helped immortalise the Tower in its Pirelli years. View of the head offices of the Press and Advertising Department, 1960, photo by Ciceri The head offices of the Press and Advertising Department, 1960, photo by Ciceri

The head offices of the Press and Advertising Department, 1970, photo by Facchini The head offices of the Press and Advertising Department, 1970, photo by De Paoli
close